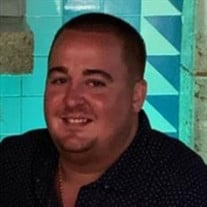 UTICA - Mr. Jason M. “Mace” King, age 31, passed peacefully in the comfort and company of his family on Saturday, September 26, 2020. Born in New Hartford on July 20, 1989, Jason was the son of James F. King, Jr. and Jennifer M. Coughlin. He attended T.R. Proctor High School and continued his education at MVCC where he received an Associate Degree in Welding and completed training and coursework earning his credentials as a Certified Welder. A self-taught and artistic chef, Jason’s talents were well regarded in the restaurant business. He was mentored by the late Matt Barone who was a master chef and owner of Creative Chefs Catering. Jason went on to become the Executive Chef at the Yahnandasis Club, and a Chef at the highly acclaimed Ocean Blue Restaurant & Oyster Bar. One of Jason’s best career decisions was working as a Sous Chef at the Fort Schuyler Club where he was recognized for competence and creativity in his craft. “Mace” was also a master of humor, jokes, and silly pranks. He was a talented, intuitive, quick learner, meticulous in his appearance and attire. He was a hard worker, especially in his career choice. As a culinary professional, he took menu changes to the max by continually adding new gourmet cuisine to the list. Although he was a chef, he still loved his mom’s meals the best! Jason was also gifted in graphic artistry, drawing, and watercolor painting, …and always humble in his achievements. He was proud to be a good son, brother, and grandson, and blessed to have a family who understood him and stood by him. Their doors were always open when he needed them. Jason received his Catholic sacraments and was an altar boy at St. Joseph & St. Patrick Church along with his brother Jamie with whom he shared many mutual occasions. It is ironic that Jason’s late grandfather, James King, passed away 31 years ago, also on September 26th, and Jason will be meeting him for the first time, …in heaven. Jason is survived by his supportive parents, Jim and Jennifer; his brothers, Jamie King (his best friend); and Tyler Wallace and his father, James Wallace; maternal grandma, Dolores “DoDi” Pitera; and his girlfriend, Alexis Tarris who has been by his side and had a great love for him. He also leaves his aunts and uncles, Colleen (Mike) Wiley, Karen (Dave) Lebiednik, Tracey Coughlin, Andrew (Lisa) Coughlin, and Grace (Keith) Watkins; many cousins; and friends, James Rydeski, Dave Reinhardt, Aaron and Brandon Wilson and Stephanie Jadhon, Michael Gathers, Josh Hall, Charles Kulick, and Travis and Jen Anderson. He was predeceased by his maternal grandfather, Andrew Coughlin; and paternal grandparents, James F. Sr. and Mary King. The family is grateful to the staff of Upstate Medical University Hospital, the doctors and personnel of the 6th, 5th, and especially the 10th Floor who went above and beyond in caring for Jason and his family. They were so very concerned and compassionate. Visitation will be held Saturday from 2:00-3:30 at the Eannace Funeral Home, 932 South St., corner of Hammond Ave. Due to the current restrictions, we will be operating at a limited occupancy. We ask for your patience as we try to accommodate those coming to support the King family. Face masks must be worn and contact tracing will be implemented. Jason's funeral service and Celebration of Life will commence on Saturday afternoon at 3:30 at the funeral home upon conclusion of visitation. Please take a moment to connect with Jason's family through the “Memories” section of his obituary. Our prayers go out to all as a sign of our continued support.

The family of Mr. Jason M. "Mace" King created this Life Tributes page to make it easy to share your memories.

Send flowers to the King family.