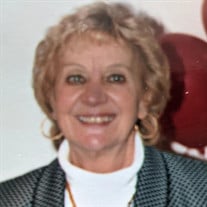 UTICA - Janet A. (Barone) Raymer, age 86, went home to the Lord when she passed away on Friday, December 3, 2021, with her loving family by her side. Born in Utica on January 28, 1935, Janet was the daughter of the late Louis and Julia (Lawrence) Barone. Raised and educated locally, she attended Bleecker St. Elementary, Roosevelt Jr. High, and was a graduate of T.R. Proctor High School/Class of 1953. She continued her education at MVCC. At one time, she was married to Ronald W. Raymer, and from that relationship came the blessing of four beautiful children. Janet began her working career right out of high school with her first job at Blue Cross. For many years, she was a homemaker, pausing to raise her children. She then returned to the workforce as a secretary at Whitesboro Senior High School, where she remained for a number of years. Lastly, she was employed at the Oneida County Clerk's Office, from where she retired after seventeen years of service. Janet had the gift for conversation and was a “social butterfly” with a charitable heart. She trusted in the Lord and prayed for those she loved and held dear to her heart. Janet was a lifelong parishioner of St. Mary of Mt. Carmel/ Blessed Sacrament Parish, and while she lived in Tampa, Florida with her son Mark, she attended the Epiphany of Our Lord Catholic Church where she served as the parish photographer and was involved in the Young at Heart program in the church community. She was also a member of the Town & Country Senior Center in Florida. Upon returning to Utica, she joined the St. Anne's Society at her Utica parish and served as a Eucharistic Minister. She also attended the Parkway Senior Center and joined the Red Hat Society. She looked forward to monthly luncheons with the Proctor Girls as they took turns hosting get-togethers with high school friends. When her son Mark passed away, Janet's life changed forever... Janet is survived by her daughter, Julie A. Raymer; her sons and daughter-in-law, James "Jim" and Carm Raymer, and Ronald “Ron”, Jr., and Oliva Raymer. She held close to her heart the memory of her son, Mark Raymer who passed on February 8, 2012. She also leaves her grandchildren, Joey, and Adana Durse, James and Cristina Raymer; Ronald “Ronnie” III and Frida Raymer, and Michelle Raymer; Mark “Marky” and Amanda Raymer; great-grandchildren, Cecelia, and Capria Raymer; Aivy Raymer, and Ronald Raymer IV. Janet also loved the family canine Lucky – each of them received great companionship from one another. She is survived by her brother, Peter L. Barone and the memory of her late sister-in-law, Virginia; many nieces and nephews including Helen and David Zalewski, and Lorraine and Ken Smith; and Alice Barone; as well as her great-nieces and great-nephews; her in-laws Jack and Joyce Raymer, Dena Raymer, and a host of friends. She was predeceased by her nephew, Louis W. Barone; and aunts and uncles, especially Aunt Angeline Lawrence and her in-laws, William Raymer, and Sue Bell. The family extends sincere appreciation to Dr. Brian Chase, Dr. John Pylman, and the staff at Sitrin Health Care Center, for the personal attention they displayed to Janet. The family will honor and commemorate Janet's life at a private time. Family and friends are respectfully invited to attend Janet's funeral service and Celebration of Life which will commence on Wednesday morning, December 8, 2021, at 10:00 at St. Mary of Mt. Carmel/Blessed Sacrament Parish, where her Mass of Christian Burial will be offered. Entombment will take place in Resurrection Chapel Mausoleum in Holy Trinity Cemetery at the convenience of the family

UTICA - Janet A. (Barone) Raymer, age 86, went home to the Lord when she passed away on Friday, December 3, 2021, with her loving family by her side. Born in Utica on January 28, 1935, Janet was the daughter of the late Louis and Julia (Lawrence)... View Obituary & Service Information

The family of Janet A. (Barone) Raymer created this Life Tributes page to make it easy to share your memories.