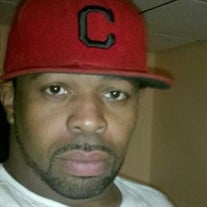 UTICA/LAS VEGAS, NV - Mr. James M. Winston, Jr. (affectionately known as Boo Boo) went into the loving arms of the Lord on Wednesday, September 23, 2020 when he passed away unexpectedly in his home in Las Vegas, Nevada. Born in Utica on August 20, 1977, James was the son of James “Jim”, Sr. and Dawn (Rucker) Winston. He was a graduate of T.R. Proctor High School and continued his education at MVCC where he majored in Welding. James had a passion for cars. He owned and operated Winston’s Auto on Mortimer Street in Utica. He had a natural aptitude and a gifted mind in diagnosing and fixing any mechanical problem. He could listen to your car and tell you exactly what was wrong. He was always right! Boo Boo was a gentle giant, and he treated his customers with kindness. Caring about his community, he would often repair a vehicle at no cost if the owner didn’t have the means. Recently, he traveled for work to various states, but his last years were spent working in Las Vegas with his mechanical skills. James is survived by his parents, James Sr. and Dawn; his sons, James M. Winston III, and Christian James Winston; his sisters, Alicia Winston-Dix of Florida, Janelle Winston of New York City, Deanna Winston of Alabama, and Chavon Rucker of Buffalo; and his nephews, Mikel Dix and Jordyn Dix. James also had a special relationship with Braco Mujagic, who he felt was more of a brother than a friend. He is also survived by his godfather, Willie T. Barnes; his godson, Sammy Mujagic; little buddies, Adin, and Angel; and a host of aunts, uncles, cousins, and friends. James was predeceased by his maternal grandmother, Elizabeth Rucker; paternal grandparents, Fred and Olga Winston; his godmother, Bessie Tanner; aunts, Sharon Chastine, Gwendolyn Harper, and Carrie Rucker; and uncles, Johnnie Winston, and Ashby Vess. Visitation will be held Monday morning from 11:00-12:00 noon at the Eannace Funeral Home, 932 South St, corner of Hammond Ave. Due to current restrictions, we will be operating at a reduced occupancy. We ask for your patience as we try to accommodate those coming to support the Winston family. Face masks must be worn and contact tracing will be implemented. The family will honor Boo Boo’s life in a private Home Going Service and Celebration of Life. Interment will take place in Forest Hill Cemetery at the convenience of the family. Please take a moment to connect with James’ family through the “Memories” section of his obituary. Our prayers go out to all as a sign of our continued support. On James’ graduation day, he rode up on Genesee Street bouncing in his custom 1964 Chevy Impala complete with hydraulics. He bounced the car so much that it split completely down the middle. He made a very late and memorable entrance! A Special Thank You to the Andrews family of Las Vegas, Nevada. He loved you all! The Winston family would like to thank everyone for their support, calls, texts, flowers and cards.

UTICA/LAS VEGAS, NV - Mr. James M. Winston, Jr. (affectionately known as Boo Boo) went into the loving arms of the Lord on Wednesday, September 23, 2020 when he passed away unexpectedly in his home in Las Vegas, Nevada. Born in Utica on August... View Obituary & Service Information

The family of Mr. James M. "Boo Boo" Winston, Jr. created this Life Tributes page to make it easy to share your memories.