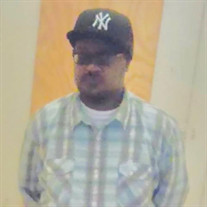 UTICA - Mr. James Paul Scarborough, Jr., age 48, affectionately known as “Crazy”, went home to the Lord when he passed away on Thursday, June 10, 2021. At the time of his passing, those he loved most were in his heart. Born in New York City, NY on October 6, 1972, James was the son of the late James Paul Scarborough and Sandra Williams. He was educated in the New York City Public School System and in 1998 he came to Utica. On Valentine’s Day, he married Tisher “Tish” Rogers with whom he shared a union blessed with family and many good times. James worked at the McDonald’s Corporation at the North Utica location in the Maintenance Department. His helpful nature and giving soul earned him the respect of many people. As a dad, he spoiled his kids with love and attention. He was overjoyed to be an uncle and was attentive and actively involved in their lives. To his family, he was their “right-hand-man” and he was a perennial prankster, full of positive energy. But within their hearts, he was their “crazy Uncle James”, and they loved him. James enjoyed watching documentaries and an occasional movie, especially crime dramas, with Scarface at the top of his list. He was also a fan of the WWF (World Wrestling Federation). He loved Chinese food and his wife’s home cooking, especially lasagna, and his sister’s special dish, shrimp parmigiana. He was also a pro at barbecuing. James prayed to the Lord and his faith was with him to the end. He was always reminded by his sister of their life growing up together, and he reminisced about all good times shared with the people who knew and loved him throughout his journey. James is survived by his wife, Tisher “Tish”; his children, Jalek, Kalise, Quason, Latish, Schwanika, and Dejanae; numerous grandchildren; and his sister and brother-in-law, Lynette and Kelvin Flowers. He also leaves his nieces and nephews, Leniece and Delano Brissett, Ayyana Flowers, and Chevelle Leftwich; in-laws, and the many friends who blessed his life. He was predeceased by his brother, Darryl Leftwich; father-in-law, Willie Williams Jr.; mother-in-law, Dolores Selby; and brother-in-law, Willie William IV. The family wishes to thank the caregivers who compassionately tended to James and his family. Visitation will be held Saturday afternoon, June 19, 2021 from 2:00-3:00 at the Eannace Funeral Home, Inc., 932 South St., corner of Hammond Ave. James’ Home Going Service and Celebration of Life will commence on Saturday at 3:00 p.m. at the funeral home immediately upon conclusion of visitation. Interment will take place in Forest Hill Cemetery at the convenience of the family.

The family of Mr. James Paul Scarborough Jr. created this Life Tributes page to make it easy to share your memories.

Send flowers to the Scarborough family.