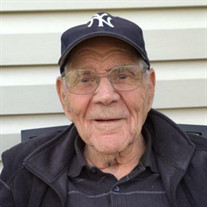 NEW HARTFORD - Mr. James P. Monterose, age 96, passed away peacefully on Tuesday, September 21, 2021. Born in Utica on April 18, 1925, James was the son of the late Vito and Theresa (Farina) Monterose. Raised and educated locally, he attended Utica schools. On February 7, 1948, he married the former Catherine Marino with whom he shared a loving and devoted union of 64 years prior to her passing on November 8, 2012. Jim worked as a Route Man for over 40 years for Abelove Linen Supply Company retiring in 1987. He was well-respected and will be remembered for his friendly and outgoing ways of service to others. He was a helpful man who was dependable whether it was being a confidant or a handyman to his neighbors and friends. As patriarch, his priority was meeting the needs of his family and being there as a father and husband. He raised a wonderful family and his children admired his values, work ethic, and the honorable way he lived his life. He was grateful for the years he spent with his grandkids when they were younger ~ Wednesdays at McDonalds in Washington Mills were special times. He maintained cultural traditions including Sunday gatherings and holiday celebrations. Jim was involved with Parish life at the Church of Our Lady of Lourdes as a member of the Men’s Club and a volunteer at Church Bingo. A benevolent man, he was also one of the founding members of the First Booster Club at Utica Free Academy, always conscientious and concerned for others. James is survived by his son and daughter-in-law, Steven and Susan Montrose. He held close to his heart the memory of his daughter, Camille Caulkins who passed on April 15, 2017. He also leaves his son-in-law, Gary M. Caulkins; his grandchildren, Jessica Caulkins, Amanda and David Agneta; Katherine “Kate” and Neil Curtin, and Erin and Collin Ellis; and his great-grandchildren, Aidan, and Logan Agneta; Hannah Curtin, Abigail Curtin, Adeline Curtin, Darren Curtin, Audrey Ellis, and Henrie Ellis. He also leaves many nieces, nephews, great-nieces, great-nephews, cousins, in-laws, and friends. He was predeceased by his 6 brothers, Anthony, Joseph, Bruno, Emilio, Frank, and Dominick Monterose. The family will honor and commemorate Jim’s life at a private gathering. Relatives and friends are respectfully invited to attend James’ funeral service and Celebration of Life which will commence on Tuesday, September 28, 2021 at 11:00 at the Church of Our Lady of Lourdes where his Mass of Christian Burial will be offered. The family will receive visitors at the conclusion of the Mass. Entombment will take place in Resurrection Chapel Mausoleum at Holy Trinity Cemetery where he will be laid to rest beside his wife, Catherine. Expressions of sympathy in the form of donations may be directed to the Camille Caulkins Memorial Scholarship at Notre Dame Elementary School, Our Lady of Lourdes Catholic Church, 11 Barton Av., Utica, NY, 13502

The family of Mr James P. Monterose created this Life Tributes page to make it easy to share your memories.

Send flowers to the Monterose family.