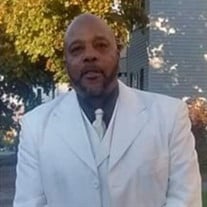 UTICA - James Lee Adams, Sr. ”Winky”, age 61, passed away on Tuesday, June 1, 2021. After a year-long courageous battle with cancer James transitioned peacefully into eternal rest. Born in Belle Glade, Florida on January 12, 1960, James was the second born child and the #1 son (first born) of Joyce Adams. In the 1960’s, his family relocated to Utica, NY where James attended Brandegee and Conkling Elementary schools and Utica Free Academy high school. A proud veteran, he enlisted in the United States Army where he honorably served his country stationed in Ft. Jackson, South Carolina. Winky’s military background instilled him with additional structure and core values. He was blessed with two sons, and the older of the two sons was named after him, James L. Adams Jr. At one time, James was married to the former Louise Kline and he had a second son, Derelle Adams. Winky also had two bonus sons, Romelle Ponder, and Leon Kline. Winky also shared a marriage with Charlene Love, and she remained with him to the end, as a friend. She and her current husband, Fabian were a source of support for any of Winky’s needs for which everyone is thankful. Winky worked as a truck driver, and was employed at Feher Rubbish Removal & Recycling Company, and most recently had a position at Elg Utica Alloys, Inc. Winky was known to be a “Momma’s Boy”. He was very respectful and loved and honored his elders, a virtue that came from his family upbringing. As a dad, he did a good job guiding his kids. He was thoughtful, and he was the epitome of an exemplary person and very overprotective of his sisters. He was a good cook, with chili and spaghetti as his specialties, and ham as his favorite. Winky enjoyed family fishing trips and the serene setting. The family get-togethers were lively, with music and dancing, and it was love that was always the cause of the good times. Winky played basketball during his youth, and during high school at Utica Free Academy. He was a coach for Dick Miller’s Youth Premier Basketball team and mentored the players. He was an avid Dallas Cowboys fan. All in All, Winky was kind, compassionate, generous by nature, and beloved by many. Winky was a member of Friendship Baptist Church; he loved the Lord and church was a huge part of his upbringing. James is survived by his mother, Joyce Adams; his children, James L. Adams Jr (Jennifer Alberico), Derelle Adams (Erica Blackshear), and bonus-sons, Romelle Ponder, and Leon Kline. James also leaves his grandchildren, Eriyahna Adams, Prince Adams, and Saint Adams; siblings, Rose (Jeff) Shealey, Sandra Linen, Ronald Adams (Pamela Cobane), Gary Linen (and his late wife, Betsy Linen), Rebecca (Arlene) Linen-Hernandez, Lakiesha (Artie) Linen-Neal, Anne Zielinski, Traycee Adams, Jahmilia Adams, Carolyn Adams, and Joetta Adams. James was predeceased by his Grandmother, Dorothy M. Jones; aunt, Carolyn Gadsden; uncle, Ivory Adams Jr.; siblings, John Linen Jr., Katrina M. Adams, Mary M. Linen; nephew, Odum Shealey; and cousin, Edward Patterson. Also left behind to remember Winky is an aunt, Marva Adams; uncle Alonzo Gadsden; a host of nieces, nephews, great-nieces, great-nephews, cousins; and the many friendships he made in his life that were so important to him. Friends may pay their respects to Winky on Wednesday morning, June 9, 2021 from 10:00 – 11:30 at the Eannace Funeral Home, Inc Celebration of Life will commence at 11:30 upon the conclusion of visitation officiated by Rev. March. Interment will follow in Forest Hill Cemetery with Military Honors.

The family of Mr. James Lee "Winky" Adams Sr. created this Life Tributes page to make it easy to share your memories.

Send flowers to the Adams family.