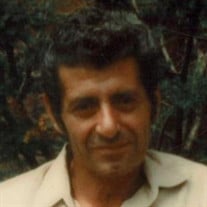 N. UTICA - Mr. Jack “Turk” Zogby, age 96, passed away on Monday, July 19, 2021 in the comfort and dignity of his home with those he loved most by his side. Born in Utica on February 15, 1925, Jack was the son of the late Shaheen and Nabeha (Nojaim) Zogby. He attended Roscoe Conkling Elementary School and was a graduate of T.R. Proctor High School/Class of 1943. Following his graduation in the midst of The War, Jack enlisted in the United States Army where he proudly served his country with honor stationed in the European Theater of Operations as well as the Western Pacific Theater of Operations until his tour concluded in March of 1946. Jack was the recipient of numerous Citations for his performance and time in service. On February 17, 1957 he married the former Carol O’Donnell; they were a social couple who enjoyed family life and loved and cared for one another to the very end of their 64 years together when Carol passed away four months ago on March 20, 2021. Jack began his civilian career at Griffiss Air Force Base, followed by his venture as co-owner of the Gem & Diamond Upholstery Company. He later ventured into the restaurant business operating Steak & Greens locales in East Utica. Lastly, Turk worked for the City of Utica/DPW. He was very supportive of his daughter Connie’s specialty stores including “Creations by Connie”, “Secret Garden”, and “Angel’s Gardens”, and would open them in the morning and close them in the evening because he truly enjoyed spending time with the clientele of Downtown Utica. Jack was a charismatic gentleman who enjoyed life and had stories galore! He maintained his physical activity, and he remained young, body and soul. He and his buddies loved to take day trips to amuse themselves by finding new places to discover and these journeys kept old friends close. His children adored him and honored him as the Best Dad in the world. His patience and calm demeanor was imparted onto his children’s hearts. He cherished his grandchildren and they were active in his life and advocated for and approved of everything he did! Turk was a champion and avid hand ball player up until his 70’s, as well as being an excellent chess player. For 7 days a week, 365 days a year, he went out for breakfast at George’s on James Street or Toma’s on Mohawk Street. He had great friends and good conversations, and they all had their own ways and routines. He played weekly card games, especially with his friend Pat Korrie which was the equivalent of great entertainment. He was an amazingly hard worker, meticulously maintained his yard, shoveled the snow before anyone could be there to assist him, grew a vegetable garden second to none, and drove his car all into his 90’s, as well; what a remarkable life! Jack was also an “animal whisperer”, and he easily talked any dogs who may not have been approachable to show peaceful mannerisms. As a veteran, he was among the first group from the Mohawk Valley to embark on the Bus Tour to see the Memorials in Washington, D.C. and he was so proud to have that experience. He was active in local VFW Lodges and American Legions in earlier years. For Turk, holidays were great opportunities to share treasured memories, festive meals, and fine spirits with his loved ones. The NY Yankees had one of the most loyal fans in Turk, and he would often try to convert those of another team to know the talents of his beloved “Bronx Bombers”. In looking back on Jack’s life, we will remember a man who truly loved his family and his country and leaves a legacy of all he did for those he loved the most. Jack is survived by his children and their spouses, Connie (Zogby) and Joe Betar, Adele and James Guarno, and Jack Zogby Jr. who tirelessly cared for his dad at home and made frequent trips to Byrne Dairy for ice cream with him; his beloved grandchildren, Joseph Betar, Esq. and fiancée Erica Cole; Marissa Guarno and Kaleb Crowe, and James A. Guarno and fiancée Ally Martens; his sister, Adele Jones; and the memory of his brother Joseph Zogby, and his sister Agnes Ferris who preceded him. He also leaves his nieces, nephews, great-nieces, great-nephews, cousins, in-laws, and friends. The family wishes to thank the Veterans’ Administration personnel who set up Acacia Home Health Care, particularly Lisa, Dee, and Rose, followed by the guidance of the Hospice & Palliative Care staff during the last week. Visitation will be held Saturday afternoon, July 24th from 4-5 at the Eannace Funeral Home, Inc., 932 South St., corner of Hammond Ave. He will be laid to rest in St. Agnes Cemetery at the convenience of the family.

The family of Mr. Jack "Turk" Zogby created this Life Tributes page to make it easy to share your memories.

Send flowers to the Zogby family.