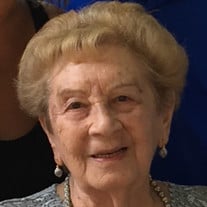 UTICA – Mrs. Isabelle R. “Bella” (Rubbicco) Sfinas, age 101, passed away on Friday night, December 10, 2021, in the comfort and dignity of her home. Born in Revere, Massachusetts on February 6, 1920 to the late Frank A. and (Maria) Catherine (Magaldi) Rubbicco, Bella was raised and educated in the Bay State. The Depression Era hit during Bella’s adolescent years, and as a 14-year-old, she turned to the sewing shops to work and help support her family. During that time, the Sfinas eventually made their way to Utica and NY Mills. At one time, Bella was married to her first husband Victor Fuccillo, who passed away on September 4, 1951. The pair had been married on June 18, 1939. After a time, Bella married Charles Sfinas on October 6, 1962, who passed away on December 22, 1993. Bella was a woman who believed in herself. She raised her children on her own, and lived by the mantra: “Don’t ever say you can’t until you can.” Bella first found employment with the Court Vue Luncheonette, which she operated with her husband Charles. Subsequently, she took on a position at the Utica Library on Lincoln Ave, where she remained until her retirement. Though life was not always easy, Bella had an uncanny ability to find the humor. Those who knew her fondly remember Bella as spontaneous and outgoing, a woman with an infectious laugh and a quiet wit. Her smile was as contagious as it was beautiful, and Bella delighted in keeping company with friends. She was even known for her daily delight: her morning laugh at the “funny times” in the newspaper, and always with a cup of tea in hand. True to her light-hearted style, Bella believed a swig of Blackberry Brandy could cure all. Bella also loved playing pinnacle. Bella held Revere, Massachusetts as her home after having resided there for many years. Following her move to NY, she often returned for trips back to those Revere roots. Bella was a spiritual woman who believed that God controls all things, and that He would be her guide. She sought consistently to accept God’s design for all things, and lived by the motto “His will be done.” She worshipped at St. Mary of Mount Carmel/Blessed Sacrament Parish. Bella is survived by her daughter, Carmella Guzski and she held close the memory of her son-in-law, Donald Guzski who passed in June 2004; she is also survived by her daughter, Catherine Lucia. Bella leaves behind her sons and their wives, Carl and Brenda Fuccillo, Frank Fuccillo and Linda Russo, and Christos Sfinas and Tammy Escue. Bella will be fondly remembered by her grandchildren, Greg Fuccillo, Shelly and Greg Patnod; Linda Fuccillo, Frank Fuccillo, Jr., Todd and Lisa Fuccillo; David and Graceann Guzski, Dawn Eberley and Mark, and Denise and Tom Powers; Michael and Chrissie Lucia; Kristos Sfinas and Claire Griffith, Caitlyn and Taylor Loucks; and Dustyn, and Kylie Mierek. Bella cherished the memory of her grandsons, John “J.J.” Lucia who passed on May 29, 2011, and Brian Sfinas who passed February 1, 2018. She will live on in the hearts of her great-grandchildren, Alex, Greg, Kayla, and Dylan Patnod; Stephanie, and Amanda Bien; Brianna, and Alyssa Fuccillo; Victoria and Rick Hensel, and David Guzski; Andrew, Matthew, and Adam Eberley; Trevor Powers; Kayleigh, and Natalee Lucia, and Emorie Loucks; and her great-great-granddaughter, Ella Hensel. Additionally, Bella is survived by her sisters, JoAnn O’Connor, and Rosemary Geis; as well as nieces and nephews – especially Tony and Patti Rubbicco, and Susan and Ernie Walge, who showed devotion to her care – great-nieces, great-nephews, and many cousins, especially Rita LaBrie. Bella leaves behind many friends at Steinhorst Square. Bella was predeceased by her brothers and sister-in-law, Vincent Rubbicco, Philip and Stella Rubbicco, and Frank Rubbicco; her sisters and brothers-in-law, Lena and Dominick Salamina, Maria Catherine Cataldo and Dominick, and Carmella Rowland; her cousin Cathie R. LaBrie; and cherished friend, Fran Ficano. Visitation will be held for family and friends on Saturday, December 18, 2021 from 1:30 – 2:30 at Eannace Funeral Home Inc., 932 South St., corner of Hammond Ave. Relatives and friends are respectfully invited to attend Bella’s funeral service and Celebration of Life which will commence immediately upon conclusion of the visitation at the funeral home. Regardless of vaccination status, face masks are required, to remain in compliance with the county mask order. Entombment will take place in Christ Our Savior Mausoleum at Calvary Cemetery at the convenience of the family.

The family of Mrs. Isabelle R. (Rubbicco) Sfinas created this Life Tributes page to make it easy to share your memories.

Send flowers to the Sfinas family.