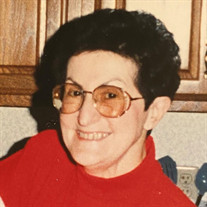 UTICA – Mrs. Isabelle (Rosa) Guido, age 96, passed and was reunited with her husband on Tuesday afternoon, February 22, 2022, in the comfort and dignity of her home, with her nieces and nephews by her side. Isabelle was born in Utica on August 18, 1925, to the late Dominick and Lucia (Pietropaolo) Rosa. She graduated from T.R. Proctor High School/Class of 1943. Isabelle married the love of her life, Raymond A. Guido, on February 15, 1947. The couple was blessed to share 58 years together. Isabelle and Raymond were a couple very much in love; the pair worked hard to make their relationship both rewarding and fulfilling as they established a strong foundation of steadfast devotion, mutual respect, and shared values and traditions. The Rosa and Guido families made for a dynamic family union, and they will always honor Isabelle’s and Raymond’s marriage. Her beloved Raymond passed on April 6, 2005. Isabelle enjoyed a longstanding career of 40 years with New York Telephone, where she was promoted several times due to her outstanding work ethic. Her dedication was well recognized, and her career ended with her retirement from her role as Supervisor of the Utica Office of New York Tel. Her coworkers always remembered her with affection and never forgot her special days. The model of a perfect lady, Isabelle was elegant, precise, and classy; her person was truly iconic. Additionally, her desires were benevolent and she is remembered for being a generous and giving woman. Their home was open to all, and many accepted Isabelle’s open invitation – including her siblings, and never neglecting a visit were her five brothers. Later, Isabelle’s nieces and nephews frequented her welcoming home, filling it with the additional laughter and joy that comes with the next generation. Isabelle was a wonderful aunt. She unfortunately had not been able to have her own children, but was blessed that her nieces and nephews became very much like her own. Her house was always immaculate and it gave Isabelle great pride to open its doors to others; she particularly loved to entertain. In the kitchen, Isabelle transformed into a teacher who instructed others in her many recipes, baking skills, and culinary tricks. She shared the secrets behind countless delicacies, and even shared the favorite Rosa family traditional “gemmalone,” which was always served with black coffee and anisette! Isabelle lived according to the ideal, “family first.” Her presence constantly contributed greatly to each family gathering, making every event she touched “more special.” Family life kept her busy, as Isabelle hosted and attended extensive Sunday dinners – and every saint’s day was honored with its special traditional meal. Isabelle and Ray adventurously traveled to destinations within the United States, as well as to Europe. It was never unlike them to invite family to accompany them. These trips created countless incredible memories that are still embedded in the minds of those who had been lucky enough to join them. A woman who valued the Truth of her faith and the love of her family, Isabelle believed that if something was awry, one better fix it, so as not to lose out on the love and closeness faith and family provide. She lived by Proverbs 3:5-6, “Trust in the Lord with all your heart and lean not on your own understanding; in all your ways, acknowledge Him and He will make straight your paths.” Isabelle’s ability to improve events was not reserved to family functions; indeed, she embellished the activities at her parish as well. An active member at St. Anthony & St. Agnes Church, Isabelle eagerly participated in various events, including the annual bazaar, St. Cosmas and Damian Feast, and was part of the infamous initial group of ladies who made pizza fritta which were just a few of the things she took on. She was involved with the remarkable number of people on the parish members’ list, and left behind, along with Ray, a legacy of generosity and devotion that will not soon be forgotten. Isabelle is survived by her brother and sisters-in-law, Dominick and Carmella Rose, and Florence Rose. She was preceded by her siblings and their loves, Mary and Joseph DeGeorge, Adeline and Frank Juliano, Michael P. Rose, John F. Rosa, Angela “Angie” Rosa, Patrick J. Rose, and Ronald A. and Lynda Rosa. Isabelle leaves behind many nieces, nephews, great-nieces, great-nephews, great-grand-nieces, great-grand-nephews, and cousins. She shared in treasured friendships with her longtime neighbors, especially Amy and Bob Elinskas, who looked in on her with a grateful heart. Isabelle was predeceased by her father-in-law and mother-in-law, David and Angeline (Rotundo) Guido; her brothers-in-law and sisters-in-law, Vincent R. and Phyllis Guido, and UPD Richard J. and Jackie Guido; and her nephews and niece, Vincent L. Guido, and Richard A. Guido, Sr., and Maryann (Guido) VanDreason. The family wishes to extend a thank you for the care provided by the staff of Hospice and Palliative Care, Inc. who were welcoming and allowed Isabelle to remain in her home; a special note of gratitude is particularly given to Crystal and Irene, for their outstanding compassionate and tender care. Another note of thanks is extended to Sarah, who was a true blessing and took care of Isabelle in her home – it was clear she had family values in her heart. The family honored and commemorated Isabelle’s life at her bedside at the time of her passing. In lieu of flowers, memorial contributions may be made to St. Anthony & St. Agnes Church; envelopes will be available in the vestibule. Relatives and friends are respectfully invited to attend Isabelle’s Mass of Christian Burial on Thursday, March 3, 2022 at 11:00 a.m. at St. Anthony & St. Agnes Church, 422 Tilden Ave. Entombment will take place in Resurrection Chapel Mausoleum alongside her husband at the convenience of the family.

UTICA &#8211; Mrs. Isabelle (Rosa) Guido, age 96, passed and was reunited with her husband on Tuesday afternoon, February 22, 2022, in the comfort and dignity of her home, with her nieces and nephews by her side. Isabelle was born in Utica... View Obituary & Service Information

The family of Mrs. Isabelle (Rosa) Guido created this Life Tributes page to make it easy to share your memories.

Send flowers to the Guido family.