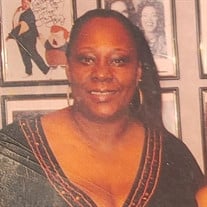 UTICA - Inez “Miss Inez” (Shelly) Duvall, age 70, went home to the Lord and was reunited with her son Ed, when she passed away on Sunday, August 1, 2021 in the comfort and dignity of her home with her loving family by her side. Born in Greenville, Mississippi on April 3, 1951, Inez was the daughter of the late Willie Shelly and Louvenia Wesley. Over the years, she resided in Miami, Texas, Brooklyn, Oklahoma, Germany, and ultimately made Utica her home in 1989 where she raised her family with guidance and concern for their wellbeing. At one time, she was married to Stephen Duvall and to that relationship came the blessing of children, and the peace that they knew together at the end of his life. Inez was employed by Marriott-Sodexo USA. She was well thought-of by the administration and peers who affectionately coined the title of “Miss Inez” for her. She formed many good friendships during her 20 years of service at MVCC. A feisty gal, Inez spoke her mind and didn’t hold her tongue! Her spunky personality was complemented by her open heart, non-judgmental nature, and wisdom she gained from living her own life. As a mom, she kept her children and grandchildren close. A caring, good-hearted woman, Inez imparted these attributes to her kids who embraced them in their lives as evidenced when they cared for her so tenderly during her illness. She wanted her family close, no matter what it took, …she saw the fruits of her labor. Because her five grandchildren were her everything, she shared with them the stories of her life and she wanted them to be the best they could be; and they have in no way disappointed her. They are coming into their own gracefully and in her image. She also showed her love in the meals she prepared for them ~ all their favorites, and her experimental recipes that were outstanding because she put her own twist on everything. She mapped out her table settings, and presented feasts for all. She was a party girl at heart. Cooking and entertaining was a major portion of how she put her love into practical, everyday life. Her food was artistic because it reflected her personality, and she missed being able to continue pleasing her loved ones with the love that permeated her kitchen. She would sometimes treat herself to a manicure, or buy things for her house which was so well appointed. She was a meticulous homemaker and a great decorator, for every season. She made her home conducive for living with children and two grandchildren, allowing them to take care of one another. They felt blessed and were deeply committed to fulfill her wish that they remain in her home until her passing. Inez remained available to the needs of each of her children, always walking beside them during difficult times, and her journey could not end until her family had all their troubles under control. She was very intuitive and knew the spirit of the moment, and everyone heeded the warning. She had an open heart and you could confide in her and she would hold your troubled thoughts in trust. She was honest and good- intentioned, yet it was always up to you to know when to listen and get yourself together. Her methodology of mentoring was not only confined to her own children ~ her children’s friends knew the routine as well. Inez knew God, and he knew her; He provided, and she was appreciative. He lived in her heart and soul; and she knew peace and salvation. Inez is survived by her children and housemates: her daughter, Sanjolé Duvall; son, Mylo Duvall; and the memory of her son who she never for a moment forgot, Edward F. “Big Ed” Shelly who passed on June 20, 2015; grandchildren, Cassandra Shelly, and Taliah, Vanessa Shelly; Nylen Brown, and Jazz Brown; and her great-grandson, Jedidiah. She often thought of her siblings, but she found a special bond with her brother Mike Williams. She also leaves her nieces, nephews, great-nieces, great-nephews, cousins, and friends. The family extends their gratitude to the staff of The Oncology Group at Slocum Dickson, the personnel of the Faxton Cancer Center, Hospice and Palliative Care of Oneida County, all of who were so good to Inez. Visitation will be held Saturday, August 7, 2021 from 2:00-4:00 at the Eannace Funeral Home, Inc., 932 South St., corner of Hammond Ave. Floral offerings are graciously accepted. Inez’ Celebration of Life will commence on Saturday afternoon at 4:00 at the conclusion of visitation. Interment beside her son Edward will take place in Forest Hill Cemetery at the convenience of the family.

UTICA - Inez &#8220;Miss Inez&#8221; (Shelly) Duvall, age 70, went home to the Lord and was reunited with her son Ed, when she passed away on Sunday, August 1, 2021 in the comfort and dignity of her home with her loving family by her side. Born... View Obituary & Service Information

The family of Inez (Shelly) Duvall created this Life Tributes page to make it easy to share your memories.

Send flowers to the Duvall family.