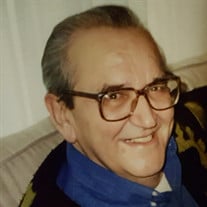 UTICA - Mr. Henry V. “Turk” Terchowitz, Sr., age 86, was reunited with his wife on Tuesday, December 15, 2020 when he passed away in the comfort and dignity of his home with those he loved most in his heart. At the time of his passing, his devoted daughter Celia was by his side. Born in Utica on June 28, 1934, Henry was the son of the late Paul and Balbina (Stanek) Terchowitz. He was a graduate of Utica Free Academy/Class of 1952. On October 11, 1958 he was united in marriage to Marie A. LoNero with whom he shared a beautiful union of 60 cherished years together. He was a loving patriarch who provided for his family and found joy in celebrating all the wonderful milestones and family traditions that were so special to him. Since Marie’s passing on June 6, 2019, he greatly missed her companionship, sweet smile, and the strong love they shared so deeply. Henry worked for the F.X. Matt Brewing Company for 44 years. He took pride in being known as a conscientious and dedicated employee who rarely missed a day of work. He held a strong commitment to the responsibilities as a Line Engineer who oversaw the many advances in automation and computerization of the bottling operations. He took ownership and pride in adapting to all the changes over the years and will be remembered as “the guy who kept the lines going”. His greatest accomplishment in life was being a loving husband and father, always concerned about taking care of his family’s needs. He will be remembered by most as a jovial man who shared his sense of humor with those around him. He loved to laugh and get others to smile. He easily made friends and would be known to start conversations with others he encountered about all the interesting news and events happening around the world. This came natural to him as he was a discerning critic of all current events and his strong enthusiasm for knowledge was fed by reading all local and national newspapers daily, until his final days. He was just as passionate and concerned about the weather in the areas that his children resided, which drew him to watch the Weather Channel constantly; he had a fascination for meteorology! In his earlier years, he enjoyed fishing and was a league bowler who once rolled a perfect game. An avid sports fan, he followed televised horse races, college basketball, football and NY Yankees and NY Mets baseball. He also tried his luck with his favorite numbers on the Take 5 and Win 4 Lotteries. In his later years, after his wife’s illness progressed, he attended to her care needs, as well as the cooking role, following her family recipes which was a sentimental attribute. He favored authentic Italian and Polish cuisine and he baked an impressive pineapple cheesecake. In looking back through the years, Henry was grateful to be blessed with a loving wife, four beautiful kids and several grandchildren… that is all he needed in life. Henry is survived by his children and their spouses, Henry V. Jr. and Robin Terchowitz, Ann and Michael Logoyda, Celia Terchowitz, and Steven and Angelica Terchowitz; his grandchildren, Keira, and Hailey Terchowitz; Rachel Verbanac, Michael A. Logoyda, John and Sarah Logoyda; and Ethan, Bennett, and Cruz Terchowitz; great grandson, Ben Logoyda, and his sister, Jane Bankert. He also leaves his nieces, nephews, great-nieces, great-nephews, cousins; in-laws, Jackie Terchowitz, and Antonio “Anthony” Leone, Sr.; and Henry and Marie’s dear and memorable friends, Barb and John Zimdars. He was predeceased by his siblings, Paul Terchowitz, Dolores Terchowitz, Helen and John Goldych, Carolyn and Brownislaw Hajdasz, and Joseph Bumpczyk; and his sisters-in-law and brothers-in-law, Beverly and Jack Morse, Blanche and Dominick Neri, and Dorothy Leone. The family extends their gratitude to Dr. Scott Brehaut for his professional concern; Dr. Stephen Graziano of Oneida Cancer Center for his compassion and expertise; as well as the personnel of Oneida Cancer Center for administering Henry’s treatments and the nurses and staff who made Henry feel special and loved; and the members of Hospice & Palliative Care for their evaluation and assistance during Henry’s final days. The family honored and commemorated Henry’s life at a private time. A graveside service and Interment in Carr Cemetery in Marcy will be held at a future day when all can gather safely. During this time of social distancing that we are all experiencing, please take a moment to connect with Henry’s family through the “Memories” section of his obituary. Our prayers go out to all as a sign of our continued support.

The family of Mr. Henry V. "Turk" Terchowitz, Sr. created this Life Tributes page to make it easy to share your memories.