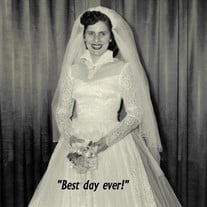 UTICA - Mrs. Henrietta "Mary" (Ganim) Calenzo, age 89, passed away peacefully on Friday, April 29, 2022, and is now reunited with her family who predeceased her. Born in Utica on April 27, 1933, to the late Joseph A. and Marie A. (Koury) Ganim, Mary was educated locally. On September 10, 1955, she married the love of her life, Pasquale “Pat” Calenzo. Her family considered the couple the “fun aunt and uncle,” who were always there for their nieces and nephews with love and laughter. They were truly a wonderful pair who loved each other and their family unconditionally. They shared 54 years together prior to his passing on September 16, 2009. Mary’s career started as an Office Associate at Yellow Freight Trucking Co. and she was a proud member of the NYS Teamsters Union. Upon the closing of the Freight Co., she worked at MVCC along with her sister-in-law, Josephine. Mary was known for her kindness and was a thoughtful and respectful woman who was friendly to all people. Those who knew her attribute these wonderful qualities to her upbringing. Mary was exceptionally close to her sister, Dolores; the two were “inseparable” with each other, and not a thing occurred in one sister’s life that the other was not also involved in. A woman who delighted in fun, Mary, enjoyed traveling with Pat, Bingo, and a good game of poker at family gatherings. Mary and Pat treated each niece and nephew as one of their own children, and all will hold her memory close to their hearts. When asked what the greatest highlight was in her life, without hesitation, “it was the day she married her husband Pat.” Mary was a life-long member of St. Louis Gonzaga Church and always held the Lord and her Church close to her heart. Mary is survived by her sister, Dolores Ganim, who was her best friend in life and with whom she was always joined together with hope; the “Three Musketeers”—Mary, Pat, and Dee Dee—were a true blessing to each other. Mary will live on in the hearts of her cousins, Gail and Anthony Sfeir, Janet Ganim Bliss, Gregory and Jackie Ganim, Charlie Ganim, Jacqueline Ganim-DeFalco, and her cousins in France including Sonia who she stayed in touch with over the years. She will be fondly remembered by her nieces and nephews, Andrew and Linda Convertino, Dennis and Jennifer Nicotera, Kenneth Elias and David Veselsky, Joseph, Jr. and Elaine Vatalaro, Diane Convertino, Barbara Vatalaro, and Byron, Jr. and Angela Elias; and by her many great-nieces and great-nephews, and great-great-nieces and great-great-nephews. During her lifetime, Mary was blessed with many friendships that warmed her heart. She was predeceased by aunt, Mary, and uncle, Joseph Vatalaro, Sr., who were like parents to Pat in his youth; and in-laws, Angeline and Angelo Convertino, Philomena and John Nicotera, and Josephine and Byron Elias, Sr. She was also preceded by her nieces, Janice (Convertino) DiFondi, and Patricia (Nicotera) Annino. The family would like to extend thanks to the care of the staff of the Grand Rehabilitation and Nursing at Utica, who were very appreciated for being so personal, kind and fulfilling of Mary’s needs when she was in their care. A special note of gratitude is extended to Mohamad, all the 6th floor staff, and Lisa Holmes, N.P. who made Mary’s stay a priority. Relatives and friends are respectfully invited to attend Mary’s funeral service which will commence on Thursday morning, May 5, 2022 at 10:30 at St. Louis Gonzaga Church, 520 Rutger Street, where her Divine Liturgy of the Faithful Departed will be celebrated by Father Boutros El Hachem. The family will receive visitors at the conclusion of Mass. In lieu of floral offerings, donations may be made in Mary’s memory to St. Louis Gonzaga Church at https://saintlouisgonzaga.org/giving/; envelopes will also be available at the service. She will be laid to rest next to her husband in Calvary Cemetery at the convenience of the family.

The family of Mrs. Henrietta "Mary" (Ganim) Calenzo created this Life Tributes page to make it easy to share your memories.