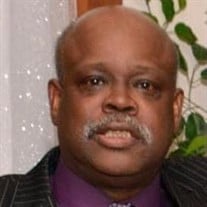 UTICA - Mr. Harold Edward King, Jr., age 61, transitioned into the arms of the Lord on Wednesday, October 27, 2021; in the comfort and dignity of his sister Martina&#8217;s home, where he was cared for by his family, and his personal aide Dimonique... View Obituary & Service Information

The family of Mr. Harold Edward King, Jr. created this Life Tributes page to make it easy to share your memories.