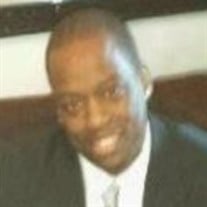 UTICA - Mr. Gerard (Gee) Dwight Robinson, age 55, a native of Bronx, New York was the fourth born child to John Robinson and the late Estell Louise Robinson on August 27, 1965. Four siblings, John Anthony, Ervin, Gilbert (Gil), and Delvin La (Mel) Robinson preceded him in death. He was a member of St. James AME Church in New York Mills. On Wednesday, January 20, 2021, Gee fell asleep on his side and woke in God’s loving arms as his mom and brothers greeted him in his everlasting eternal home, leaving his earthly Father, John Robinson, Jr. and entering eternity with his spiritual Father to experience a life with no more pain. It has been a long, exhausting battle with the sickle cell disease and all the health issues that came along with it. Gerard was born and raised in the South Bronx where friends became family and boys that passed the time of day on the community basketball court became men who would share their lives as brothers in the South Bronx. He attended Alfred E. Smith High School in the Bronx then went on to have a long career with the City of New York as a Sanitation Enforcement Agent and became Sergeant with the help of his partner in crime, in sorrows, in joy and in life (whom he missed unbearably, Gil) before he retired from the agency in 2013. Gee loved his girls: daughters, mother, sisters, and his ladies who all found themselves loving and mothering him in return which he enjoyed. To the many long-term men or brothers in his life, he was a true friend. To the girls in his life, he could be as gentle as a lamb, and to the brothers, he could be as tough as a lion. He loved them all. Gerard enjoyed traveling and shared many exciting memories with family and friends on his journeys. Gee’s crazy, weird, stinky, and sometimes unorthodox humorous spirit shall be engraved in our memories forever. He leaves behind to cherish the memories: his three children, Ebony Robinson (GA) and her mother, Elessia “Lisa” Lee (Fort Lauderdale, FL), Sharae Robinson, and Shawna Robinson (Bronx, NY); stepson AnthonySpooner, their mother Darlene Johnson, all of Bronx, NY; brother, Gerald (Carolyn Ann) Scott (Monroe, NC); three sisters, DeVana “Pookie” (Peter A.) O’Garro Jr., Brenda J. Robinson, Belinda B. Robinson, all of Utica, NY; uncle, William M. (Lillian) Robinson Sr. (Edisto, SC); aunts, Jannie “Nell” Jamison (Delaware), Everlena (Alviston) Calistro (GA), Theora (John) Pressley of Bronx, NY, Gloria Robinson and Bertha (Frank) Wilson of Edisto, SC; in-laws, Yolanda Robinson, Conncetta Johnson, Yvonne Johnson of Bronx NY, Lavern (Roy) Flowers of Roanoke, VA; and a host of cousins, nieces, nephews, family, and friends. A special appreciation goes out to his cousin, brother, friend, driver, and right hand man Eric Brown for being with him almost nonstop for the last year as he transformed to a place with no more pain. 2 Tim 4:7 I have fought the good fight, I have finished the race, I have kept the faith. Rev. 12:4 And God shall wipe away all tears, from theirs: and there shall be no more death, neither sorrow, nor crying, shall there be any more pain: for the former things are passed away. Utica’s private family Memorial service for Gee will be on Saturday, March 6, 2021 alongside his father, John Robinson, Jr’s funeral.

The family of Mr. Gerard (Gee) Dwight Robinson created this Life Tributes page to make it easy to share your memories.

Send flowers to the Robinson family.