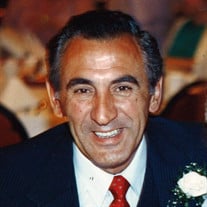 FRANKFORT, NY/FLORIDA - On Tuesday, March 17, 2020 the Lord called our Dad, George David Sykes (Saik), home to reunite with his loving wife Connie and his family after a valiant ten year battle with Alzheimer&#8217;s. He was surrounded by his... View Obituary & Service Information

The family of Mr. George D. Sykes created this Life Tributes page to make it easy to share your memories.

Send flowers to the Sykes family.