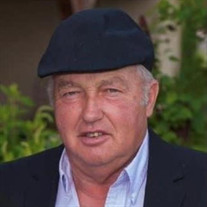 N. UTICA - Mr. George W. “Bill” Lindsay, Sr., age 72, passed away peacefully on Monday, March 1, 2021 in the comfort and dignity of his home. Born in Herkimer, NY on November 13, 1948, George was the son of the late George Henry and Martha (Murray) Lindsay. He attended Whitesboro High School. During the Vietnam Era, Bill willingly accepted the assignment of being drafted into the United States Army and was stationed in Germany where he served his country with honor and earned a National Defense Sharp Shooter Medal. At one time, he was married to the former Sandra Lindsay and to that relationship came the blessing of four children whom they both loved dearly. Bill worked as a used car dealer, a profession he honored as the owner of Lindsay Auto Sales on Erie Street and he was blessed to have his son Billy by his side to continue the legacy as a family business. Bill earned the reputation of being the go-to-guy for anything. His ‘honesty and hard work ethic’ was his trademark. Although he was rough around the edges, he had a big heart, sense of humor, and he was completely fearless in life. He was truly one of a kind. He loved his family to the depth of his soul and would do anything for them. If they needed him, he would stop, drop everything, and be there! When he became a grandfather, he also became a kid, again, and he remained young because his four grandsons were his best buddies and kept him on his toes. His three granddaughters had a special place in his heart. When they were with him, they were treated no differently, and all the rules went out the window with their loving “free-for-all” Poppy. During times of tribulation, Bill was the backbone of his family, and his motto was, “When you are going through hell, …Just keep on going!” He had a game for every season ~ hunting, fishing, boating, 4-Wheeling, and snowmobiling. He loved going to the junk yards and made it a routine. Anytime there was a family gathering, Bill and Sandra were delighted to be a part of the festivities, especially the holidays. And when it came to the choice of foods, he wasn’t bound by limits. A Christian man, Bill was of the Methodist faith. George is survived by his children and their spouses, George W. “Billy” Lindsay Jr., Melissa “Missy” and Arthur “Art” Nicotera, Tammy and John Dybacz, Sheila and George Beach; and their mother, Sandra; his grandchildren, George W. “Little Billy” III and Hope Tricia Lindsay; Kristina and AJ Peck II, and Darrell Nicotera; Johnny Dybacz, Alyssa Dybacz; and Glenn Beach; and his one and only great-grandchild, AJ Peck III who made great-grandpa’s eyes sparkle when he came into his world. He will also be remembered by his siblings and their loved ones, Carol McDonald, Thomas and Judy Lindsay, Robin Lindsay (remembering his late wife Linda Lindsay). Robin currently shares his life with his love, Flo Russo; and Wendy and Glen Upson. He also leaves his nieces, nephews, great-nieces, great-nephews, cousins, and a sister-in-law and brother-in-law, Patti and Harold “Butch” Eddy. Bill will be remembered by the many people in his circle of life. Everyone knew him by name, and he was a friend to many. As Dad always told us, “I’ll be fine” OK! The family will honor and celebrate Bill’s life at a private time.

The family of Mr. George W. "Bill" Lindsay, Sr. created this Life Tributes page to make it easy to share your memories.