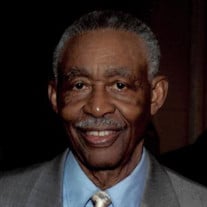 UTICA – Mr. George Edward Burke, age 99, of Utica, went home to be with the Lord on Thursday, March 10, 2022. George was born on February 23, 1923 in Augusta, GA, the son of the late Orie and Amanda (Jackson) Burke. He was educated in the public school system while residing in Augusta. He came to Utica on June 26, 1947. George had been employed for 34 years at the General Electric Company prior to his retirement. He was a member of St. Paul’s Baptist Church where he served as a chairman of the Trustee Board and was a member of the Men’s Club. He was affiliated with the NAACP, as well as the Hiram Lodge #18, and the St. Elizabeth Chapel #15. George also enjoyed passing time fishing with family and many friends throughout the years. When George passed, he was reunited in heaven with his beloved wife, Mildred (Lee) Burke who preceded him on December 8, 2021, after 66 years of marriage. He also leaves many memories to his sons and their loves, Joseph (Hollis) of Augusta GA, Darryl of Little Rock AR, and Milton (Connie) Boddie of Utica. Additionally he will be remembered by his sister-in-law, Deaconess Gladys Burke of Rochester. He leaves his legacy to his grandchildren, Brian, Shannon, Markese, Milton Jr., Marcus, Mary Tanski, Joe Howard Jr., Donna Arnette, Anita Prather, and Nita; great-grands, Jana, Siane, Marcus, Khalil, Sarai, Daniel, Samantha, Ryan, Karimah, Jada, Brian Jr., Raven, Brianna, Jamel, Tavarus, and Ashley; a host of nieces, nephews, great-nieces, great-nephews, cousins; and many additional relatives. Visitation will be held Tuesday morning, March 22, 2022, from 10:00-11:00 at St. Paul’s Baptist Church, 219 Leah St, Utica. Ritualistic services by members of the Masonic Lodge will take place at 11:00. George’s funeral and Home Going Service will commence at 12:00 noon at the church followed by graveside interment in Forest Hill Cemetery.

The family of Mr. George E. Burke created this Life Tributes page to make it easy to share your memories.

Send flowers to the Burke family.