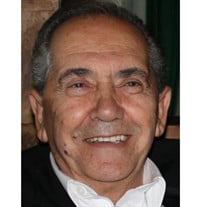 WHITESBORO - Mr. Gaetano F. “Guy” Vivenzo, age 81, passed away on Friday, April 9, 2021 in the comfort and dignity of his home. Born in Utica on June 6, 1939, Gaetano was the son of the late Gerald P. “Jerry” and Mary (Baleno) Vivenzo. Raised and educated in Utica, he was a graduate of T.R. Proctor High School. A proud veteran of the United States Army, he served his country with honor. On July 6, 1963 he married the former Shirley Williams with whom he shared 56 years in a close and loving union until her passing on September 12, 2019. At one time, Guy held a position with the Cater Lincoln Mercury Auto Group and from that role he maintained a close relationship with the Cater family. Guy’s next venture was establishing Vintage Limousine, a business he owned and operated for over 38 years providing his expertise in accommodating the area and making events even more special. Guy had an exceptional talent for music and was instrumental in forming bands in the Utica area since the 1950’s. His longest tenure was with the band “Main Event” which he formed with Don Leo. The two played together for over 40 years, sharing a special bond as band mates and good friends. Guy was a selfless man who lived his life in dedication to his wife and family. He was larger than life. Many will also remember his classic mannerisms. He was a member of the Soprano’s Club and the Antique Car Club where he met aficionados who also shared his passion, admiration, and appreciation of vintage cars of years past. Guy is survived by his daughters and sons-in-law, Mary M. and Michael Pagan, and Terese M. and Clifford Loncar; his grandchildren, Sophia Loncar, and Anna Loncar; and his sisters, Gerrianne Robilotto and Ann Scheuer. He also leaves his nephews, especially acknowledging Ben Bosco, David Sprague, and Guy Sprague; nieces, great-nephews, great-nieces, cousins, and special friends, Don and Fran Leo, Bob Friedlander, Mike Salvatore, AJ Colp, and Frank and Gloria Vescera. He was predeceased by his sisters and brothers-in-law, Eleanor A. and Peter M. Acquaviva, and Margaret and Sam Bosco; brother-in-law, Dominick J. “Dick” Robilotto; in-laws, Donna and James Weeks, and Tom Sheuer; and father-in-law and mother-in-law, Donald and Florence (Joslin) Williams, and his loving step-father, Albert Rinehard. The family will honor and commemorate Guy’s life in a private gathering. Funeral services will be held privately and at the convenience of the family. Arrangements have been entrusted to the Eannace Funeral Home, Inc., 932 South St., corner of Hammond Ave. During this time of social distancing that we are all experiencing, please take a moment to connect with Guy’s family through the “Memories” section of his obituary. Our prayers go out to all as a sign of our continued support.

The family of Mr. Gaetano F. "Guy" Vivenzo created this Life Tributes page to make it easy to share your memories.

Send flowers to the Vivenzo family.