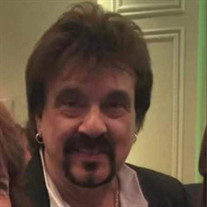 UTICA - Mr. Frederick P. “Freddy Pep” Piperata, age 67, entered the gates of heaven on Saturday, December 5, 2020 at MVHS at St. Luke’s Healthcare. Freddy was born December 28, 1952, son of Dominick and Laura M.(Pazzola) Piperata. He was a graduate of T.R. Proctor High School. He was united in marriage to the love of his life Nancy J. Durdan on October 29, 1971. It was a beautiful union of 49 years together. Freddy was a well known musician and lead singer of the band Soul Injection for over 20 years. Looking back on his career, Fred has been a frontman and lead vocalist since 1967 traveling, touring, and performing in many venues throughout Central New York, up and down the East coast, from Canada to Key West, and from Boston to Cleveland with a number of loved musicians. He has been a lead vocalist for such groups as “August”, “Punch”, “Flame”, and “Direct Hit”. Fred brought to the stage a high level of showmanship, as well as vocal leadership. Fred also played congas with the band and was an accomplished guitarist. He was a lifelong New York Giants and New York Yankees fan, and everyone knew it. Freddy was the life of the party and a natural born comedian. He had an avid love and collection of guitars that he proudly displayed. He also loved and treasured baseball memorabilia. He thought of funny, affectionate nicknames for everyone he knew and loved, a true class act, touching the hearts of the recipients. Freddy is survived by his loving wife and soulmate Nancy “Nan”; his cherished children and their loves, first born Karin and Dwayne Murrell; his only son, Freddy Piperata II and Jessica White; and the baby, Laura Piperata and John Mohr; his beautiful grandchildren, Marina Marrone and Walter Phillips, Maraye Piperata, Gianna Murrell; his namesake, Freddy III, Chris Piperata, Amya Murrell, Alex Piperata, and Nylah White; great-grandchildren, Bellamore and Anjalina Phillips; and he was a loving papa to Jay, Erica, Leela, Taylor, Ella, Mardi, Mikayla, Walter Jr., and Jai. Freddy leaves behind his loving family, and cherished his siblings; Marie S. Morreale, Richard F. “Peppy” and Beverly Piperata, Victor and Brenda Piperata, James “Jimmy” A. Piperata, William C. “Billy” and Nancy Piperata, and Paul Piperata; in-laws, George Pupura and Diana Piperata, John and Mary Lourdes Durdan, and shared a special bond with Sandra and Steve Lewandrowski; nieces and nephews; Sue, Rusty and Gail, Cathy and Joe, Ricky, Linda and Debbie, David and Patty, Victor and Katie, Robert and Yvonne, Christina and Dave, Billy and Scott, Dominick and Shannon, Tina, Lisa, Stevie, Michael and LeAnne and great-nieces and great-nephews. Freddy also leaves a special friendship with “the Kooks”, Pat and Margherita Zasa, Bill and Maryann Peck, the Soul Injection family and friends; and the many, many beloved friends and fans he made along the way too numerous to mention. Freddy was predeceased by his loving parents, Dick and Laura Piperata; his sister, Loretta A. Purpura; brother, Robert A. “Bobby” Piperata; aunts and uncles, Victoria M. Pazzola, Frank J. “Pitts” Pazzola, Anthony J. and Angeline Pazzola, and Paul and Millie Pazzola; his mother-in-law, Jacqueline Durdan; and brothers-in-law, Steve Durdan, Paul Durdan, and Russell J. Morreale. The family is grateful to the doctors and nurses at MVHS at St. Luke’s Healthcare/ICU for the care and compassion rendered to Fred. Freddy was loved by everyone who knew him. He has touched everyone in many ways. He was a family man first, a selfless, one of a kind, true class act. Freddy was an amazing cook for the family business Rosario’s and Peppy’s Pizzeria. He was a true local legend that will never be forgotten. Freddy Pep, the man, the myth, the legend. Due to the abatement of Covid-19 restrictions, relatives and friends are respectfully invited to attend Fred's Memorial Mass and Celebration of Life, lovingly planned by his family, which will be held on Saturday, July 17, 2021 at 12:00 noon at St. Mary of Mt. Carmel/Blessed Sacrament Parish. Interment took place privately in St. Joseph Cemetery.

The family of Mr. Frederick P. "Freddy Pep" Piperata created this Life Tributes page to make it easy to share your memories.

Send flowers to the Piperata family.