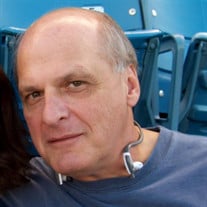 WHITESBORO - Mr. Frank A. Percacciante, age 71, was reunited with his wife Rosie and family who preceded him, when he passed away on Friday, March 6, 2020. At the time of his passing, he was in the hearts of those he loved the most. Born in Utica on February 23, 1949, Frank was the son of the late Frank and Louise (Clarke) Percacciante. He was a graduate of New York Mills High School/Class of 1967. On May 10, 1975 he married the former Rosemarie Ferrese. They were truly soul mates who were deeply in love, and it was apparent in the ways they complemented one another. They were devoted to family life - dedicating their love and energy toward each other and their boys, who were their highest priority. His beloved Rosie passed away much too soon, on April 26, 2012. Throughout his career in sales, he held himself to a high standard of integrity. He worked at K-Mart in the Sporting Goods Department, JPJ Electronic Communications Company, and lastly at Leonard Bus Sales in the Capital Region where he dedicated over 25 years as a trustworthy member of their team; a hallmark of his career. In addition to his knowledge and expertise, Frank took the utmost pride in forming and maintaining meaningful personal relationships with so many of his associates. Those relationships continued long after Frank retired to dedicate himself to the needs of his family. Frank valued time with his family and instilled those values in his children. He had many passions in his life, but it was the sharing of those passions with his family and friends that brought him the most joy. He created countless beautiful memories with his family, whether it was catching a ball game at Yankee Stadium, or taking a boat ride around 4th lake in the Adirondacks. Frank also loved using his passions to start conversations with people, and finding a common interest to build relationships. He loved antique cars and had an incredible way of remembering even the smallest detail many years later. He was also an avid dog lover, and created a wonderful home for his beloved labradors - Toby, and most recently, his buddy Henry. Frank enjoyed revitalizing old furniture, finding satisfaction in bringing back the original beauty of each piece he worked on, but it was the gifting of his many works that gave him the greatest fulfillment. Frank was well known for his wonderful sense of humor, and ability to always make people feel more comfortable by telling the perfect joke. He used his humor to get through difficult times, often eliciting laughter in moments when nobody realized how much they needed it. But above all else, Frank lived through his generosity. He was a compassionate father, a loving partner, and never hesitated to help someone who was in need. As Frank entered his later years, his dependability never wavered. He found happiness and companionship with his partner Laura, and experienced the joy of being a grandfather (“Pop”) to his precious Ella Rose. She was and will forever be his sunshine. The kindness in his soul knew no bounds and it will forever radiate in the hearts of those who loved him. Frank is survived by his sons and daughter-in-law, Frank T. and Rebecca Percacciante, and Jeffrey M. “Jeff” Percacciante; his 4-year-old granddaughter, Ella Rose, who loved her “Pop” and was the light of his life; his partner, Laura Bedford and her children, Davis, and Sean Bedford; and his sister, Carol Comenale. He also leaves his nieces, nephews, goddaughter, great-nieces, great-nephews, cousins, in-laws, John and Diane Zdanowicz, Marie Grimaldi, Jeanne and Thomas Zdanowicz, Kathleen and Budd Osborn, and Thomas and Donna Ferrese; and his friends, Nick Crane, with whom he shared a brotherly relationship in which they were “partners in crime”, and George Beckwith, his respectful and loyal friend. He was predeceased by his sisters, Lois Percacciante who passed at a young age, and Linda Zdanowicz; and his brothers-in-law, James Comenale, and Fred J. Grimaldi, Jr. The family extends their gratitude to Nurse Practitioner Sally O'Callaghan who Frank trusted on so many levels; and the nurses and technicians at Upstate Medical University Hospital/7A who were exceptional in the love and care rendered to Frank, which will never be forgotten. Visitation will be held Wednesday from 4:00-7:00 at the Eannace Funeral Home, Inc. Frank’s funeral service and Celebration of Life will commence at 7:00 immediately upon conclusion of visitation. Memorial contributions may be considered to the Stevens-Swan Humane Society online at https://stevens-swan.org/donate/; envelopes will also be available at the funeral home.

WHITESBORO - Mr. Frank A. Percacciante, age 71, was reunited with his wife Rosie and family who preceded him, when he passed away on Friday, March 6, 2020. At the time of his passing, he was in the hearts of those he loved the most. Born in... View Obituary & Service Information

The family of Mr. Frank A. Percacciante created this Life Tributes page to make it easy to share your memories.

Send flowers to the Percacciante family.