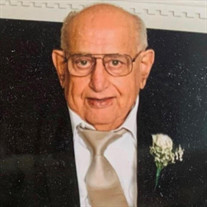 UTICA/NEW HARTFORD - Mr. Frank F. Malta, age 86, passed away, after displaying much courage, on Sunday, August 23, 2020 with those he loved most in his heart. Born in Herkimer on October 24, 1933, Frank was the son of the late Clemente “Antonio” and Frances Marie (Donato) Malta. He was raised in the valley and educated in Herkimer schools. A veteran of the United States Air Force, Frank served his country with honor during the Korean War stationed stateside in the Procurement Division. On November 9, 1957 he married the former Palma “Pam” DeMarchis with whom he shared nearly 63 years. She was always Palma to him and she was the love of his life. He always put her on the highest pedestal no matter what- the best cook, the best mother, the best wife. A barber by trade, he enjoyed his home life, watching sports and old movies (again and again). “Grandpa M” adored his grandkids who brought a glow to his face every time they entered the room. He enjoyed cooking and preparing his own unique combinations. He had a passion for gardening, and was very proud of his tomatoes which he always shared with his neighbors. He loved family holiday feasts, where there never could be enough family or food at the table - a typical, old-fashioned Italiano! Frank was a die-hard, lifelong Yankees fan who introduced his sons to the 27-time World Champions in the 60s. They would listen to games on an AM radio outside the front door of their 1134 Webster Ave. home. In his earlier years, he was an experienced local League bowler. Frank was an avid player of the ponies, right to his last days- always looking for the big score! Frank attended Mass and was a faithful parishioner of St. Anthony & St. Agnes Church. Frank is survived by his wife, Palma; his sons and daughters-in-law, Joseph and Suzanne Malta, Greg and Renee Malta, and Richard and Susan Malta; his grandchildren, Jill Malta, Danny and Rachel Malta, Eric Malta, and Samantha Malta; Bianca and John Zullo, and Danielle Malta; step-grandchildren, Eric, Patrick, Martha, Elizabeth, Michael, Andrew, and Matthew; numerous great-grandchildren; his sister, Ida Aversa; and in-laws, Michael and Linda DeMarchis. He also leaves many nieces, nephews, great-nieces, great-nephews, cousins; and a group of wonderful friends who journeyed through life with Frank and Palma. He was predeceased by his brothers and sisters-in-law, Joseph and Rose Malta, Gregory and Shirley Malta; Americo and Mary Jane Malta; sister and brothers-in-law, Marion and Anthony Talarico, and Joseph Aversa. The family is grateful to Frank’s caregivers at home, and those who tended to him after his surgery. Visitation will be held Thursday evening from 6:00-8:00 at the Eannace Funeral Home, 932 South St., corner of Hammond Ave. “TAPS Our Duty” will be present to honor Frank’s military service. Due to the current restrictions, we will be operating at a limited occupancy. We ask for your patience as we try to accommodate those coming to support the Malta family. We will only allow ten people into the building as ten people exit. Face masks must be worn and contact tracing will be implemented. Frank’s funeral service and Celebration of Life will commence on Friday morning at 11:00 at St. Anthony & St. Agnes Church where his Mass of Christian Burial will be offered with Military Honors conferred by the U.S. Air Force. Face masks are required, and contact tracing will be implemented. Entombment will follow in Calvary Cemetery Mausoleum. Please take a moment to connect with Frank’s family through the “Memories” section of his obituary on our website. Our prayers go out to all as a sign of our continued support.

The family of Mr. Frank F. Malta created this Life Tributes page to make it easy to share your memories.

Send flowers to the Malta family.