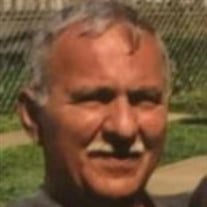 UTICA - Mr. Francis R. “Frank” “Beef” Giruzzi, Ret. UPD, age 80, was reunited with his beloved Betty when he passed away on Monday, August 23, 2021 surrounded by his devoted family. Born in Utica on August 11, 1941, Francis was the son of the late Frank R. Giruzzi and Mary (Dote) Giruzzi Lentricchia Colacino. He attended Roscoe Conkling Elementary School and was a graduate of T.R. Proctor High School/Class of 1959. A proud veteran of the United States Army, Frank served his country with honor during the Vietnam Era from 1960-1966 as a member of the 107th Military Police. On October 7, 1961 Frank married his high school sweetheart, Elizabeth A. “Betty” Caniato and from their union came 3 wonderful, loving, and caring children. Together they weathered many storms but saw everything through, in sickness and in health. They shared 52 years prior to Betty’s passing on August 17, 2014, …and Fran adored Betty until his last breath. Frank was appointed to the Utica Police Department on May 1, 1966, a career that spanned 25 years serving and protecting the public as a Patrolman and later in the Mounted Police and Narcotics Divisions. He always reflected on his time with the Utica Police Department and was very proud that his nephew Jimmy followed in his footsteps. Concurrently, Frank co-owned and operated the K-9 Dog Food Company with his brother Joe and Uncle Dickie from 1972-1982. Above all else, Frank enjoyed being with his family. He looked forward to his hunting trips with his brothers, uncles, cousins, nephews, and son. Some of Frank’s best memories were going out in the “country” with his brothers Jimmy and Joe. He also enjoyed socializing with his gin club buddies, trying his luck at the local casinos, and taking treasured vacations with Betty to many exotic destinations. Frank loved watching his grandsons play baseball. He was an avid Yankees fan and often treated his kids and grandkids to a trip to Yankee Stadium to see the pinstripes in person. He was a loyal and enthusiastic New York Giants football fan. “Beef” was the life of every party, and on the holidays when everybody gathered, you could always count on him to tell many stories, over and over again, but it always felt like you were hearing them for the first time! He also had a unique sense of style ~ he had the best dress sweats of anyone in town! Civic-minded and patriotic, Frank was a member of the Fort Schuyler American Legion Post 1290. Frank is survived by his children and their loves, and his grandchildren, Carla Giruzzi-Keena and Luis Montero, Frank R. Giruzzi III and granddaughter Elizabeth, Patrick and Wendy Giruzzi and grandsons Patrick and Parker, and Angele and Bill Worden, Jr. and grandsons Nicolas and Michael; and his siblings and their spouses, Joseph and Mary Giruzzi, James and Denise Giruzzi, Mark Giruzzi, Cynthia and James Cahill, and Maryrose and Darryl Green. He will also be remembered by his nieces and nephews, Julie (his goddaughter) and Joe Mosca, Joseph Giruzzi; Danielle and Ryan McEwen, Jimmy and Gianna Giruzzi, Diana Giruzzi; Mark Giruzzi Jr., and Arianna Giruzzi-Lupo and her husband Dan; many great-nieces, great-nephews, cousins, and in-laws. Fran had many friendships throughout his life, but found great companionship with Joseph Maida, Sal “Butch” Rizzo, Phil Bailey, Vincent Pristera, and Frank Carzo. He was predeceased by his son-in-law, James E. Keena; siblings, Joanne, Jimmy, and Denny Reilly, and Michael Lentricchia; father-in-law and mother-in-law, Elmer and Anna Caniato; special aunts and uncles, Dominick and Gloria Dote, and Jenny and Fred Arcuri; nephew, Ronald Giruzzi, Jr.; sisters-in-law, Randi Zammiello Giruzzi, and Judy Giruzzi; step-mother, Helen Giruzzi; and many additional aunts, uncles, and special friends. The family is grateful to Leo Sullivan/MD who always tended to Fran with a caring heart; Kelly Biesel/PA who was always available and compassionate; his niece, Arianna Giruzzi-Lupo/NP whose assistance and expertise was trusted and she was much loved by her uncle and family; and the nursing staff of the 2nd Floor at MVHS at St. Elizabeth Medical Center whose kindness and compassion will remain in the hearts of Fran’s family forever. Visitation will be held Friday, August 27, 2021 from 4:00-6:00 at the Eannace Funeral Home, Inc., 932 South St., corner of Hammond Ave. Frank’s funeral service and Celebration of Life will commence on Saturday morning, August 28, 2021 at 10:00 from the funeral home and at 11:00 at the Church of Our Lady of Lourdes where his Mass of Christian Burial will be offered with Military Honors conferred by the U.S. Army. Interment will follow graveside in St. Agnes Cemetery where he will be laid to rest beside his beloved Betty.