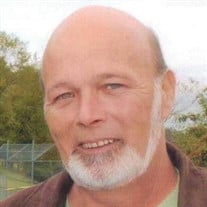 FRANKFORT - Mr. Francis E. Foley, age 70, passed away on Thursday, September 9, 2021, after a long battle with cancer, with his loving family by his side. ​Born in Utica on September 20, 1950, Francis was the son of the late Alfred L. “Tody” and Ruth (Lerch) Foley. He was a graduate of T.R. Proctor High School. A proud veteran of the United States Army, Francis served his country stationed in Korea from 1970 until his honorable discharge in 1972. Francis was the owner/operator of Foley Trucking and well-known for his dump truck, “Horney Orange”. He will be remembered for his quick wit, focused but friendly sense of sarcasm, strength of character, and the love of his family which always came first. He took pride in his home, and he loved the outdoors, especially when he was driving his restored ’67 Chevelle, his pride and joy. ​Francis is survived by Connie Epolito, the love of his life; his children, Kimberly A. and Christopher Schaible of Florida; Francis E. Foley II, and Melinda Mroz; grandchildren, Audrina Schaible, Brooklyn Schaible, Tanner Foley, Matthew and Madison Mroz; and his siblings and spouses, Bonnie Richards, John Foley and his wife Mary Duetchman , Joyce M. Williams, Joseph Foley, Jeffrey Foley, and Gail and Rick Hamilton. He also leaves many nieces, nephews, great-nieces, great-nephews, cousins, his aunt; and many friends, with special mention of Kenny, and Sling Shot. He was predeceased by his brother-in-law, Charles G. “Charlie” Richards. ​Visitation will be held Tuesday, September 21, 2021, from 4:00-6:00 at the Eannace Funeral Home, Inc., 932 South St., corner of Hammond Ave. Francis’ funeral service and Celebration of Life will commence at 6:00 p.m. at the funeral home upon conclusion of visitation. Interment will take place at Ferguson Cemetery in Frankfort on Wednesday morning at 11:00 with Military Honors conferred by the United States Army.

The family of Mr. Francis E. Foley created this Life Tributes page to make it easy to share your memories.

Send flowers to the Foley family.