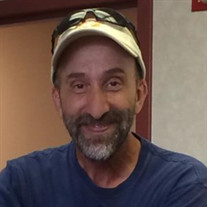 FRANKFORT - Mr. Francis W. “Fran” Diflo, Jr., age 56, passed away after a courageous battle with cancer, on Monday, July 26, 2021 in the comfort and dignity of his home, with his loving family by his side. Born in Utica on October 29, 1964, Francis was the son of the late Francis W. “Frank”, Sr. and Carmella (Delia) Diflo. Raised and educated locally, he was a graduate of Utica Free Academy/Class of 1983, where he was recognized as a stellar runner in the sport of track. A proud veteran of the United States Army, Fran honorably served his country overseas in active duty from 1992-1993, as a member of the Military Police, and followed up as a Reservist until the year 2000. At one time, he shared an 8+ year relationship with Jennifer Prentice. They appreciated their shared sense of humor and the blessings of three children; they took great pride in raising their kids together over the years and always maintained a close friendship. Fran was employed as a Maintenance Supervisor at the Municipal Housing Authority where he worked for a majority of years. He was a well rounded, highly competent carpenter and contractor. He rebuilt the home that he resided in and raised his family in. He was creative in designing and renovating and truly made his house a home. His co-workers held him in high regard as the “go-to-guy”. Fran earned the recognition because he was a dependable man, with an expansive base of knowledge and an enthusiastic work ethic. He was a real “Mr. Fix It,” always repairing, building, and helping a friend in need. He was an affable man with an engaging personality and his children were always amazed by the sheer number of people their dad knew. Fran was a supportive, proud dad who paused everything to attend his kids’sporting events. He was selfless by nature, in his caring actions and thoughtful concern for others. He was open and shared his wisdom with his children, expressing to them the importance of motivation for success in their career choices. He was a grounding force and a father figure to his own, as well as other children. He raised his kids with love and provided them with structure and values. He was also humble and kind, and embraced an old-school ethic. Fran always treated each of his children equally, although you might hear them say that his youngest, Myckenzie, was Daddy’s little girl. Christmas was always a major holiday for Fran and the kids. He embraced tradition - a real Christmas tree was a must - the bigger the better, and everyone had a part in decorating it. Fran was for anything that brought his loved ones together. He enjoyed nature and loved the land he lived on and he meticulously tended to his lawn. As he was raising his family, he shared with them activities that touched their souls and left many memories. Camping in the Adirondacks was one of Fran's and his children's favorite activities to do together. He taught his children how to fish, build a fire and enjoy the outdoors. He always had a family pet, and over time, more than one. He treated his pets just like family and provided a great shelter for them. Fran had a special place in his heart for “his babies”, and they felt it, and loved him back. Fran strived to and succeeded in being the best dad he could be. He stayed involved in his children’s lives, made time for Sunday breakfast gatherings, and never stopped caring and giving. He was a believer in his Catholic faith and he encouraged his children to believe in the Lord as he did. Fran is survived by his children, Emily A. Diflo, Jacob R. Diflo, Kaitlyn M. Diflo and Dante Rose, and Myckenzie L. Diflo; (He often said that he had 7 children, that is, including his 3 beloved dogs, Cooper, Tonka, and Archie, who were loyal companions and housemates). He will also be remembered by his sister and brother-in-law, Patricia “Patty” and Peter Cerminaro; his brother and sister-in-law, Fred and Jacqueline Diflo. He held close the memory of his sister who preceded him, Judy Diflo Perry; and also leaves his brother-in-law, William Perry. In addition, he is survived by his niece, Nicole and her husband Joe Gaylord, and Jason Perry; great-niece, Spencer Gaylord; a multitude of cousins; and an aunt Nancy Delia. He was blessed with many tremendous friends; Phil Kelly, Brian Franz, Kenny Tallman, and his brother, Fred, who all shared 30+ years of friendship. Fran took comfort in knowing that he would be joining his long time friend, Brian Fitzgerald, who preceded him last year. The family extends their gratitude to the personnel of Hospice & Palliative Care, Inc. ~ all were outstanding, including Beth and Angela. They made his last days comfortable, uplifted his soul, and made him feel that he was safe at home. His sister, Patty, brother and sister-in-law, Fred and Jackie, and his children welcomed the support of the Hospice team who helped navigate the family throughout Fran’s final journey. His work family was also a source of great support and genuine kindness during this difficult time. Relatives and friends are respectfully invited to attend Francis’ funeral service and Celebration of Life which will commence on Wednesday afternoon, August 4, 2021 at 1:30 p.m. at Historic Old St. John’s Church where his Memorial Mass of Christian Burial will be offered with Military Honors conferred. The family will receive visitors at the conclusion of Mass.

The family of Mr. Francis W. "Fran" Diflo Jr. created this Life Tributes page to make it easy to share your memories.

Send flowers to the Diflo family.