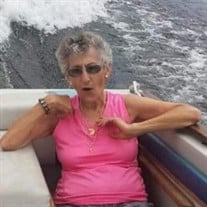 UTICA – Mrs. Francine K. (Rappa) Spinelli, age 83, went home to her Lord on Good Friday, April 15, 2022; when she concluded her time on Earth she was in the hearts of those she loved most. Francine was born in Utica on July 12, 1938, to the late Tito and Mary (Perperati) Rappa. She graduated from T.R. Proctor High School in 1956 and while there, she met and dated her husband-to-be. On August 29, 1959, Francine married George D. Spinelli. During their 59 years of marriage, they were good partners in parenting and supporting their family life which was the most important value they possessed; George passed on October 25, 2018. Indeed, Francine was built to be a mom and passed all the tests with flying colors. She broke the mold of motherhood, far surpassing it with her dedication to being present in the lives of her children, who were the core of her being. A committed worker, Francine began her longtime tenure as a Customer Service Representative at J.C. Penney in the Catalog and Credit Department. The majority of her working years were spent as a Dispatch Operator with Mohawk Valley Water Authority. For over 30 years, she was meticulous with her assignments and dedicated to her customers and to her employer, virtues that were recognized for as a woman of her era. Francine took great pride in her children, considering their successes as her blessings. She would sacrifice anything for each of them and was intentional in being actively involved in their lives. Her family fondly remembers their travels to Lake Placid— through treacherous weather conditions they endured the journey and accomplished their purpose. A woman of great hospitality, Francine took care to often think of others and how she could be of assistance. She was known for her selflessness as well as her ability to power through any trial or tribulation—especially when on behalf of her family. Francine was vivacious, determined, and sometimes even known to be feisty! Francine was additionally meticulous with the details of her home, both the interior as well as the exterior. She never found its upkeep to be a daunting task, but rather was proud of her castle and the work she had poured into it to make it so beautiful. Moreover, Francine delighted in her passion for cooking and held a special value in upholding traditions. She had co-partnered with George in making sure the holidays and other special occasions were always well celebrated. Francine was often still before the Lord, waiting patiently for Him. A believer who had never lost her faith, she took solace in every opportunity for prayer and never missed memorializing her loved ones in a celebration of Mass to pray for their souls. She was a parishioner of St. Anthony and St. Agnes Church. Francine is survived by her daughter, Mary Catherine Spinelli and John Bickford. Loving each of her children with an immense depth, Francine’s heart never recovered from the profound loss of her infant son George Anthony Spinelli on December 7, 1973; her daughter Pamela M. “Pam” Spinelli on March 4, 1987; and her son Joseph George “Joey” Spinelli on July 11, 2006. Francine will be fondly remembered by her brother and sisters-in-law, Joseph and Arlene Rappa; she was recently preceded by her brother Benny Rappa, as well as his wife Antoinette. Francine leaves behind her nephews, including Mark Rappa, Ben and Michelle Rappa, and Paul and Ginny Rappa. She was preceded by her niece Jolene Rappa. She leaves several great-nieces and great-nephews. Francine shared in longtime, precious friendships with Julie Dybacz, and Mary Theresa Zupancic; all of whom shared much laughter and joys yet took solace from one another in their life’s adversities. She was predeceased by her father-in-law and mother-in-law, Candido and Catherine (Parkulo) Spinelli, and her brother-in-law, Tony Spinelli. The family would like to extend thanks to Dr. Matthews and Dr. Kachare, Francine’s longtime physicians, as well as to the nurses and staff at the ER, ICU, and the Palliative Care of MVHS at St. Elizabeth Medical Center. A note of appreciation is extended to Francine’s neighbor Donna, who kept a watchful eye on her; to Joe Zito, who was attentive to many needs of Francine; and to Mike and Diane Nassar, who were close family friends and who were so supportive to many of Francine’s loved ones during her untimely illness. Visitation will be held on Thursday morning, April 21, 2022, from 10:30—11:45 at St. Anthony and St. Agnes Church, 422 Tilden Ave. Francine's Mass of Christian Burial and Celebration of Life will commence at 12:00 noon at the church. In lieu of floral offerings, memorial contributions may be made to the Skating Club of Utica-Whitestown online at skatingclubuticawhitestown.com; envelopes will also be available at the service. Interment will take place in Calvary Cemetery at the convenience of the family.

The family of Mrs. Francine K. (Rappa) Spinelli created this Life Tributes page to make it easy to share your memories.

Send flowers to the Spinelli family.