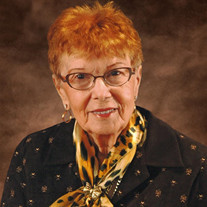 UTICA- Mrs. Frances A. (Gargano) Vendetti, age 94, transitioned to her remarkable spiritual journeys on Wednesday, January 15, 2020 in the dignity and privacy of her home with her loving family by her side. Born in Utica on June 13, 1925, Frances was the daughter of the late Francesco and Catherine (Speciale) Gargano. Raised and educated locally, she attended T.R. Proctor High School and subsequently enrolled in the Utica School of Commerce where she began her love for bookkeeping. On June 8, 1946, she married her first and only love, Pasquale V. “Pat” Vendetti. Throughout their married life, her husband was her “boyfriend”, an alliance that retained the romance and respect in their relationship. Interwoven with the common threads they shared was an endless love that sustained their lives. Her beloved Pat passed away on December 2, 1986, ending their 40 year love affair. Frances began her bookkeeping career at the Utica Freight Forwarding Company and later held positions at Fanelli Express, and John Gallilo, CPA. Her meticulous work ethic and attention to detail were evident in all her endeavors. The core values that guided her life were her spirituality and her love and interest in people. Blessed with an inner strength, a compelling moral compass, and charity for others, Fran began each day with a prayer: “Help me, Dear God, help me today to be my best in every way. I salute the living Christ in me, salute the living Divinity in me, and I’ll leave myself lovingly in your hands. Dear God, help me today to do my best in every way”. All in all, Fran viewed life as an opportunity to aspire to be among the good and the blessed. Wisdom in her actions, kindness in her words, and fairness in her judgments were her guiding lights. When her children were young she served as a den mother for her sons’ Boy Scouts troop and her daughters’ Girl Scouts group and was involved with a reading program at Hughes Elementary School. Later in life, she was grateful for the opportunity to interact with her grandchildren each day and impart to them the reflections of her soul. She was active in their lives and together they enjoyed laughter and memories filled with wonderful times and experiences of life. During her youth, Fran shared a wonderful closeness with her dad and treasured the inherited talents she learned from him in the areas of gardening, landscaping, and masonry. His outlook and lessons on life served as a positive example to Fran as she developed into a strong, confident woman. She was a member of the Historical Society, The Order of the Eastern Star where she held numerous positions, most predominantly as Chaplain, as well as a member of the Daughters of the Nile, a fraternal organization that works to benefit Shriners Hospitals for Children, and the Silvertones where she sang soprano during their visits to residents in nursing homes to brighten their day. She also taught the game of Mahjong. Fran’s involvement in all these organizations was a way for her to help others. She was a parishioner and facilitator at the Church of Our Lady of Lourdes. Frances is survived by her sons and daughters-in-law, Dr. John and Barbara Vendetti, and Francis and Debra Vendetti; her daughter, Patrice K. Vendetti with whom she shared a home, and her fiancé Richard Mitchell. Always close to her heart was the memory of her daughter, Annette Marie Vendetti, who passed away in 1985. Frances will also be missed by her cherished grandchildren, John Patrick Vendetti; Erika Vendetti; Heather Tillman; Anthony and Ashley George, and Katherine George and Christopher Graham; her great-grandchildren including Antonia, and Lucia Vendetti; and her sister, Angeline Bordeau. Her extended family includes many nieces, nephews, great-nieces, great-nephews, cousins, and in-laws. She was predeceased by her brother and sister-in-law, Rosario and Marietta Gargano; her two sisters and brothers-in-law, Mary and Frank Noti, Pauline and John Stark, and Harley Bordeau; and her brother-in-law and sister-in-law, Ralph and Angeline Vendetti. The family extends sincere thanks to Dr. El Khoury and the special connection shared with Frances; and his staff, especially Kerry. She was able to remain in her own home due to the gentle kindness and love of her family and caregiving angels, Debbie, Maria, and Rosalie as well as those who cared tenderly for her in earlier years. The family will honor and commemorate Frances’ life at a private time. Relatives and friends are respectfully invited to attend a Memorial Gathering which will be held on Monday from 4-6 at the Eannace Funeral Home, Inc. Frances’ Memorial Service will take place at 6:00 on Monday at the funeral home. Those wishing to express an act of kindness may make a donation to the Shriners Hospitals for Children in continued support of an organization that was close to Frances’ heart; envelopes will be available at the funeral home, can be mailed to 516 Carew St., Springfield, MA 01104, or you can contribute online at https://donate.lovetotherescue.org/give/119312/#!/donation/checkout.

UTICA- Mrs. Frances A. (Gargano) Vendetti, age 94, transitioned to her remarkable spiritual journeys on Wednesday, January 15, 2020 in the dignity and privacy of her home with her loving family by her side. Born in Utica on June 13, 1925, Frances... View Obituary & Service Information

The family of Mrs. Frances A. (Gargano) Vendetti created this Life Tributes page to make it easy to share your memories.

Send flowers to the Vendetti family.