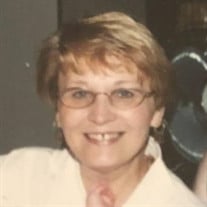 FLORIDA/NORTH UTICA - Mrs. Frances “Fran” (Russell) Gowett, age 71, passed away unexpectedly in her home on Sunday, July 4, 2021, yet her daughter and her family take comfort during this time of sorrow knowing that she is now with her two daughters and husband in heaven, …there is something to be said about having a broken heart. Born in Utica on September 28, 1949, Frances was the daughter of the late Frank and Anna Marie (Starczek) Alibozek, and she also knew the love and guidance of her step-father Harry W. Russell. Raised on Smith Hill Road, she was a graduate of Utica Free Academy and at a later time in life, went on to receive her credentials as a New York State Registered Nurse from the St. Elizabeth School of Nursing. She had been married to Thomas H. “Tom” Gowett and they were bonded in life by the love and needs of their children. When they were raising their family they resided in the Rome area. She missed his gentle and passive ways since his passing on May 25, 2018. Fran was employed at Faxton Hospital and several local area nursing homes, and healthcare facilities where she shared her selflessness and dedication to helping others. She often spoke of her nursing responsibilities and reflected upon how important it was to care for others with respect and compassion. Even though obstacles were prevalent in her life, she chose to reach for her dreams and to have a sense of purpose. She worked hard, cared for her home, and made the best of what life presented her. She understood her weaknesses and her strengths and was never afraid to be a little different in her approaches. One of her favorite activities was seeking out garage sales where she searched for just the right nicknack and furniture, often over-purchasing to lend a hand to family and friends ~ she never wanted to miss a good sale. She also loved working outdoors, planting floral and vegetable gardens, and weeding them as well! She cooked in abundance and was so generous with the meals she prepared that if you were lucky enough to appreciate one of those dishes, she would deliver it to you each time she made it! Fran knew the fashion trends and always tried to keep up with the times, but what was especially unpredictable was that she would change the color of her hair at the drop of a dime! Fran divided her time between the Utica area and Florida. When her daughter Donna recently became ill the family decision was for her and Donna to return to Utica. In hindsight, their return home was a blessing in disguise, for everyone was able to be together and help one another as loved ones should. Fran’s grandsons brightened her world and each of them spent individual time with her. She wanted to discuss their thoughts and things that they do as young men. To see them mature over the years is amazing and sentimental. Fran’s son-in-law David was the son she never had. He and Fran would often remember and sing oldies on Alexa as they cleaned the kitchen! David’s kind heart always worried about Fran and her wellbeing and he was her “go-to man”. Jenn had courage and was the daughter who was the voice of reason for her mom. She was proud of who she became, and in the end, Fran and Jenn kept the family together. Photographs of past holidays and birthdays capture and chronicle the passage of time and the memories and love that grew as the years went by. Anyone who is a mother can truly understand how impossible it could be to deal with the loss of two daughters, at such a young age, and be able to face each day. Fran’s untimely passing was caused by a heart attack sparing her from years of grief before her, may she rest in peace, be with her loved ones, and in the arms of the Lord. Fran is survived by her daughter and son-in-law, Jennifer A. “Jenn” and David M. Viti, Sr., and she is now reunited with her daughters, Donna M. Gowett who recently passed on June 12, 2021, and Tracey J. Gowett who passed on April 15, 2004. She also leaves her grandchildren, David M. Viti, Jr., and Matthew Thomas Viti, Jeana Viti and fiancé Rob Hofler and their children Alivia, and Anthony; her sister, Barbara A. Balio; nieces, nephews, great-nieces, and great-nephews of the Balio and Gowett families; her in-laws, Sue and Lynn Dote, Sharon Gowett-Calhoun, Sandy Lindsay, Patricia “Patti” and Harold “Butch” Eddy, Timmy Gowett, and James and Mary Gowett. She also will be remembered by her special friends. She was predeceased by her brother, Pasquale “Patsy” Desimone; her brother-in-law, John L. Balio; and her husband Tom’s aunt, Leona Clark. The family is grateful to the NYS Troopers, First Responders, and the Herkimer County Investigator and Coroner who were so compassionate and made the necessary procedures as bearable as possible. Relatives and friends may pay their respects to Fran’s family on Tuesday evening, July 20, 2021 between 5-5:30 at the Eannace Funeral Home, Inc., 932 South St., corner of Hammond Ave. Her Memorial Celebration of Life will commence at 5:30 at the funeral home.

FLORIDA/NORTH UTICA - Mrs. Frances &#8220;Fran&#8221; (Russell) Gowett, age 71, passed away unexpectedly in her home on Sunday, July 4, 2021, yet her daughter and her family take comfort during this time of sorrow knowing that she is now with... View Obituary & Service Information

The family of Frances "Fran" (Russell) Gowett created this Life Tributes page to make it easy to share your memories.

Send flowers to the Gowett family.