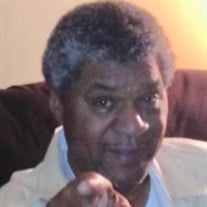 UTICA – Mr. Ferman “Frank” Butler, Sr., age 81, unexpectedly went home to the Lord on Thursday, December 16, 2021, with the ones he loved the most by his side and in his heart. Born in Whiteville, NC on March 4, 1940, to the late James D. and Katherleen (Davis) Butler, Frank was raised and attended schools in NC for his early education, and then he relocated to Niagara Falls, NY. There, he completed his high school years. At one time, Frank was married to Hermie Lee Camp, with whom he shared the blessing of six children. The two were great parents, and Frank is remembered by his children as a supportive father. Frank tapped into his own determination to encourage them and motivated his kids to prioritize education. Moreover, he gave his children rules to help ground them, as well as forming their foundation in the faith by raising them in the Church. Later, Frank shared in a second union with Dorothy Smith-Butler, with whom he shared life for a period of time. He began his years in sales as a car salesman for an automobile dealership in Jacksonville, FL. A man with an affinity for fashion, Frank devoted his professional life to the industry; he owned and operated Mr. Soul’s Clothing Store, located on South Street in Utica. Frank was renowned for his exceptional style, and this gifting, paired with his determination, helped him succeed in his chosen field. Frank loved his family, and relished opportunities for quality time with them. Whenever the family came together for a barbeque, he would enjoy watching his grandchildren and his great-grandchildren have fun. He especially had a particular place in his heart for his great-granddaughter, Christionna, whom he affectionately named “Munchkin.” Frank was a “travelling man” and he would always stop to see family along the way. Indeed, he enjoyed being frequently on the road to sightsee around the United States and took up a hobby of collecting business cards from the locations he had visited. His other favorite hobby was to play the daily numbers, which he did religiously. Frank was a strong yet sweet man who had a gentle, conversational style. He was friendly and dearly loved by family and his community. Frank was admired for all that he could do, and he will be missed! Frank is survived by his children and their loves, Brian (Shelita) Butler, Ferman Butler, Jr., Ursel Butler, and twins Ronald (Marisol) Butler, and Donald Butler. Frank was preceded by his cherished children, Cynthia Butler, and Fern and Charles Butler. He will be fondly remembered by his host of grandchildren and great-grandchildren; as well as by his sister, Barbara Butler; and his brothers, Cleo Butler, James Butler, and Larry Butler. Frank was predeceased by his sisters, Diania Butler Allen, Dorothy Butler-Carter, and Janice Butler. Additionally, Frank leaves behind many nieces, nephews, grand-nieces, grand-nephews, and cousins. He also enjoyed the friendship of fellow residents at Margaret Knamm Apartments. The Butler family wishes to extend their gratitude to the doctors who cared for Ferman with great concern; as well as to Ferman’s grandchildren, Alexis and Truman, who were instrumental in the health care of their granddad, for which the family is so proud. The Butler family will commemorate Frank’s life at a private time. He will be laid to rest in his family’s private cemetery, Butler Cemetery, in Tabor City, NC.

The family of Mr. Ferman "Frank" Butler, Sr. created this Life Tributes page to make it easy to share your memories.