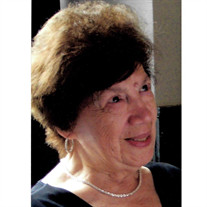 UTICA - Mrs. Felice G. “Felicia” (Sparagna) Sciortino, graced with the longevity of a centenarian, was greeted at the Gates of Heaven by her mother, father, husband Dominick, daughter Patricia, grandson Anthony, and great-granddaughter Alex, when she passed away on Saturday, February 6, 2021 at the age of 101. Born in Utica on December 4, 1919, Felice was the daughter of the late Nicholas and Civita (Selso) Sparagna. Raised and educated locally, she attended Bleecker Street Grammar School. At the age of 12, her mother passed away, an untimely event that had a great impact on Felicia until the day she passed; she longed to see her mother again. Upon her mom’s passing, she shared a home with family members, especially her sister Mary who then became her second mother. On January 17, 1942 she married Dominick J. Sciortino with whom she shared 45 years in a happy marriage and a joyous life. Their home was a loving place and they were wonderful parents who provided for their family. Dominick passed away on June 13, 1987. During her working life, Felicia was employed at the Allen, Schmidt, and Pringle Clothing Manufacturing Company. She then worked at General Electric at the Bleecker St. location, and later held a position as a clerk at the Board of Elections. Lastly, she worked at the Neighborhood Center, and given her love for children, it was the most fulfilling and rewarding occupation. Felicia constantly gave of herself, never wishing for anything in return. Blessed with a forgiving and giving nature, her philosophy, “My door is always open” understated her benevolent heart. As a mother, her greatest attributes were nurturing, listening, loving, and counseling. She was the matriarch of her home and her children contextualized the wisdom in her words. She had a goodness about her soul and continued to confer her motherly love onto her grandchildren. She had a passion for cooking and loved to feed her family as a gesture of “grama’s love”. She was surrounded by generations of grandchildren and great-grandchildren, a providential gift that kept her young. As her name implies, Felicia was light of heart and lucky by nature. In line with these traits, she challenged the odds of winning games of chance and playing poker with her friends. When the casino opened, she was happy to try her luck and take in the excitement. Felicia’s love of the Lord flourished early in her life. The Holy Rosary was her comfort, and her home was filled with icons of Jesus and his teachings were visible, literally and figuratively, in her home. She prayed so ardently that she was honored and adored as an angel on earth by her family. A communicant of the Church of Our Lady of Lourdes, she never missed Mass on Sundays or Holy Days of Obligation, and in her later years, watched Mass on Mother Angelica’s channel, the Eternal Word Television Network. The divine mercy of the Lord was important to her and the foundation of who she was. Her devotion to her faith in God and the blessed Mother was her light, and in difficult times she never asked why, but prayed endlessly, and lived a full life. As her family and friends attest, Felicia graciously cared for 3 generations of her family. She always tried to help others in their needs, a kindness that came with gratitude from those who knew her good deeds and humble heart. When God called her home, He smiled and said, “Welcome, Felice. You have done my Holy will”. Felicia is survived by her daughters and son-in-law, Marion and Frank Gerace, Jean (Sciortino) Trippe with whom she shared a home, and the memory of her daughter Patricia “Patsy” Sandouk who passed away on December 31, 1993 and her son-in-law Lou Sandouk. She also leaves her cherished grandchildren, Felicia LaGasse (who resided with and was raised by her grama and knew her as a second mother) and her husband Ken; Lisa and Dr. Donald Romanelli; and the memory of her grandson Anthony D. Sandouk (May 5, 2016); Becky and Mark Kogut; Victor and Jolene Gerace; great-grandchildren, Owen, and Blake LaGasse (“her boys” for which she shared a special bond with); Sarah, and Grace Romanelli; Sydney Kogut; and the memory of Alexandra “Alex” Kogut (September 29, 2012); her canine granddog “Hank”; nieces, especially Joanne (Patrick) Tomaino, and Florence Marie (Sam) Diprima; nephews, and friends who have been a great support and are considered as family, Pat Turner, Brenda Choquette and Brian Chase, Rene Johnson, Randi Johnson, Emily Johnson, Angela Santino, Carmelita and Anthony Annuich, and the Belmonte neighbors, Guy, Anthony, and Joe. She was predeceased by her siblings, brothers Tony, Michael, and Joseph Sparagna; sister Mary Ferraro who was a blessing to Felice in her life. A special thank you to the nurses and staff of the IMCU, ICU and 2nd floor, especially Sue, Cassandra, and medical technician Georgia at MVHS at St. Elizabeth Medical Center – they all made magic happen! The family will honor and commemorate Felice’s life at a private time. Relatives and friends are respectfully invited to attend Felice’s funeral service and Celebration of Life which will commence on Thursday, February 11, 2021 at noon at the Church of Our Lady of Lourdes where her Mass of Christian Burial will be offered. Social distancing and registration for contact tracing will be implemented. Also, a mask covering your nose and mouth will be required. In lieu of flowers and in Felicia’s memory, please extend a kind deed to someone in need and pay it forward. Entombment in Calvary Cemetery Mausoleum will take place privately and at the convenience of the family. During this time of social distancing that we are all experiencing, please take a moment to connect with Felicia’s family through the “Memories” section of her obituary. Our prayers go out to all as a sign of our continued support.

The family of Mrs. Felice G. "Felicia" (Sparagna) Sciortino created this Life Tributes page to make it easy to share your memories.

Send flowers to the Sciortino family.