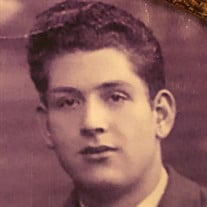 UTICA - Mr. Felice E. Gigliotti was reunited with his wife Maria when he passed away on Wednesday, February 19, 2020 in the comfort and dignity of his home with his loving family by his side. Born in the village of San Bernardo, province of Catanzaro, Italy on April 12, 1927, Felice was the son of the late Luigi and Angelina (Scalzo) Gigliotti. On December 21, 1950, in Italy, he married the former Maria Carmela Bonacci. He adored her and dutifully cared for her during her long illness, until her passing on July 8, 2005. His children are forever grateful for the care he gave their mother in her time of need. Felice was trained in Italy by Fiat as a master automotive mechanic. In 1952 the young couple had the opportunity to come to America where he transitioned to home appliance repair and became the owner and operator of Central Washer Sales and Service. Felice garnered a lifelong following of customers because of his honesty and integrity. A renaissance man in his own right, he had a keen intellect, was an avid reader, musician, woodcarver, and could fix anything! He was also a cyclist who won regional competitions as a young man in Italy on a bicycle he built himself. He kept an impeccable garden. Much produce began as seedlings and he irrigated the land in an old world style. He grew a variety of grapes on his vines and fermented them into homemade wine. He was also a culinary artist and, ahead of his time, followed the concept of “farm to table” from his bounty. He shared his harvest with family, neighbors, and friends. Sunday dinner was served at 1:00 p.m., and “don’t be late!” At family holiday gatherings he made Italian rice croquettes which disappeared almost instantly. He enjoyed watching Serie A Italian and World Cup soccer matches with his sons and grandson, as well as programs from Italy on RAI Network. He was a faithful communicant of St. Mary of Mt. Carmel/Blessed Sacrament Parish. The most important things in Felice’s life were his family, religion, and Italian heritage. Felice is survived by his children and spouses: Angela and Walter Bange, Vinicia and Frank DeFazio, Honorable Louis Gigliotti, Michael and Lisa Gigliotti; and daughter-in-law, Carmela Gigliotti. He was “Nonno” to his amazing grandchildren with whom he shared an enriched and loving relationship: Suzanne, and Jacqueline Bange; Maresa (Christopher Kutas); Cristina (Brendan Lyons), Sarah (Andrew Tubis), Mary Gigliotti; Michael Gigliotti (fiancée Kandice Schmidt), and Alexandra Gigliotti (companion Angelo Gentile); his great-grandchildren: Francesca Maria, and Anthony Christopher Kutas; Everleigh Rose Lyons; and Luciana Maria Gentile. He also leaves his nieces, nephews Angelo, and Andrew Bonacci, great-nieces, great-nephews, and cousins in Australia, Italy, and the United States; and in-laws Frank and Sylvia Bonacci. He shared his later years with his special friend, Nellie Maggiore. He was predeceased by his sisters and brothers-in-law, Maria and Raffaele Molinaro, and Marietta and Vincenzo Marasco. In his final days, Felice was grateful to have the blessings and compassion of his friend Father Joe Salerno. Visitation will be held Sunday from 2-5 at the Eannace Funeral Home, Inc, Those wishing to express an act of kindness in Felice’s memory may make a donation to Hospice & Palliative Care, Inc. online at https://hospicecareinc.org in memory of the care given to Felice and his late wife Maria; envelopes will also be available at the funeral home. Felice’s funeral service and Celebration of Life will commence on Monday morning at 10:00 from the funeral home and at 11:00 at St. Mary of Mt. Carmel/Blessed Sacrament Parish where his Mass of Christian Burial will be offered. He will be laid to rest in Our Lady Assumed into Heaven Corridor at Calvary Mausoleum.

UTICA - Mr. Felice E. Gigliotti was reunited with his wife Maria when he passed away on Wednesday, February 19, 2020 in the comfort and dignity of his home with his loving family by his side. Born in the village of San Bernardo, province of... View Obituary & Service Information

The family of Mr. Felice E. Gigliotti created this Life Tributes page to make it easy to share your memories.

Send flowers to the Gigliotti family.