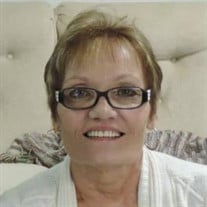 ​UTICA - Mrs. Esther Ann (Scafidi) Mazzei, age 70, was reunited with her beloved husband Al and became an Angel when she passed away on Monday, April 27, 2020 at MVHS at St. Luke’s Healthcare. ​Born in Utica, N.Y. on October 29, 1949, Esther was the daughter of the late Joseph and Anna (Distante) Scafidi. Raised and educated in Central New York, she graduated from T.R. Proctor High School in 1967. It was there that she made many lasting friendships through the Nu Pi Gamma sorority, which was a self-named group of girls who became life-long friends. Esther was a proud patriot and veteran of the United States Army. On July 7, 1979 she married Alfred P. “Al” Mazzei, with whom she shared 35 devoted years prior to his passing on September 15, 2014. ​After high school, Esther accepted a position at the Concord Insurance Agency in South Utica. In 1977, she answered the call to serve and joined the U.S. Army Reserve. From 1980-1985, she served as a full-time Civilian Military Technician (CMT); from 1985-1992 she changed to AGR (Active Guard Reserve) status; and from 1992-1995 she transitioned back to a CMT. In 1995, she was promoted to Master Sergeant (MSG / E-8) and transferred to Texas, where she continued to serve as a CMT for the United States Army Reserve. In 2000, she was hired by the United States Postal Service. She retired from a distinguished government career. ​Esther loved unconditionally, supported her family, and made an impact on every life she touched. Although she faced adversity in her final few years, she persevered and continued to make a difference to those that loved her. She was a loving sister, aunt, cousin, and friend. Her cat, Nico, was her best friend and they were inseparable. ​Esther was technically savvy for her generation, which enabled her to stay connected and brighten the spirits of friends and family near and far. A gentle, generous woman, Esther was a source of inspiration and comfort to so many, and her beautiful life will be remembered by all who knew and loved her. She was a communicant of St. Anthony & St. Agnes Church, and was guided by her Catholic faith and her trust in the Lord’s will. ​Esther is survived by her sister and brother-in-law, Angela and Fred Dziezynski; her beloved nephew and Godson, U.S. Army Brigadier General Joseph and his wife Dawn Dziezynski, nephew, Robert Dziezynski; her great-nephew and Godchild, Kolbe Stuckwisch; very special cousins, Patricia Dennison and Jennifer and Wade Karam, who provided untiring and continuous efforts to care and watch over Esther during her years of need; John and Marie Lucarelli, who were always there for her and Nico; and her brother-in-law, Michael F. Mazzei, with who she shared a wonderful relationship through the years. ​Left to carry on her memory are Esther’s special friends, John and Isabelle Kostera and their family, who checked in daily with her and assisted her with medical appointments or anything she needed; Vincent and Donna Sbarra, who were friends with Esther and Al for many years and would visit often; and the late Bobby Hoyle, who she had known since he was just a little boy. Even though he was dealing with his own health challenges, he would communicate with her almost daily to give her inspiration and hope. ​The family extends heartfelt thanks to the nurses, therapy staff, and assistants at The Grand in Ilion, especially Monica Hadsell for her concern, visits, and prayers for “Aunt Esther”; and Doug McGregor for his professionalism and commitment. A special thank you to Cheryl Costello, Esther’s neighbor, for taking care of Nico the past few months. ​Due to current health concerns and in keeping with federal and state regulations, services will be held privately. A Memorial Mass of Christian Burial will be offered in Esther’s honor at a future date to be announced. Please take a moment to connect with Esther’s family through the “Memories” section of her obituary on our website. Our prayers go out to all as a sign of our continued support.

The family of Mrs. Esther Ann (Scafidi) Mazzei created this Life Tributes page to make it easy to share your memories.

Send flowers to the Mazzei family.