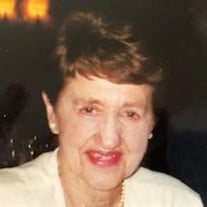 UTICA - Mrs. Esther Julia (Lenuzza) Marchetta, age 90, passed away on Saturday, July 10, 2021 in the comfort and dignity of her home with her loving family by her side. ​Born in Utica on January 27, 1931, Esther was the daughter of the late Martin and Elizabeth (Toppazzini) Lenuzza. A graduate of T.R. Proctor High School/Class of 1949, Esther had the distinction of being elected Secretary of her class. She went on to graduate from the Eastman School of Dental Hygiene where she earned her New York State License as a Certified Dental Hygienist. She began her vocation at Broadacres and subsequently accepted a position teaching with the Herkimer School District where she worked until her marriage. On August 11, 1962 she married Anthony A. Marchetta. An active couple, socializing kept them young and brought them great fun, friends, and festivity. Esther enjoyed caring for her home and planting flowers to adorn it, and entertaining family, friends, and neighbors at her pool parties. Esther traveled to many unique destinations in her earlier years and gained a diverse perspective on life by observing cultures of foreign countries. Years later, Esther and family, including Martin and Elizabeth, ventured on a trip to tour Europe, visiting relatives throughout Italy and making many memories. ​Esther and Anthony were attentive, supportive parents, and their home was always open. Esther was not only a mother, but also a friend who recognized and appreciated each of her kid’s unique personality, preferences, and whims. She was non-judgmental, yet forever available to give advice, if they asked. She raised a great family and taught her children to give freely and wholeheartedly, and harbor a kind, honest soul. Her mantra was “love your neighbors”. She was a giving, welcoming woman with a positive attitude, and she never worried about the little things. She loved to volunteer because helping people was fulfilling to her. She offered her time and talent to serving at the Hope House, teaching Religious Education at St. Agnes Parish, and joining the Reading School Program in the Utica School District. She was creative, loved the arts, and played the piano. She was proficient at crocheting and needlepoint, and was never afraid to be a little different. And through her fortitude and focus, she never let anything steal her joy. One would think her list of avocations and activities has been completely noted, but not so. Esther also was skilled at skiing, a sport she shared with her husband and children at Song Mountain, Val Bialis, and Snow Ridge. Esther and Anthony were members of numerous ski clubs and a Tuesday group into their early 70’s! They participated in couples bocce matches at the Toccolana Club followed by a delicious Italian fare luncheon. But it was Christmas Eve, always at Pond Lane, filled with good wine, company, and conversation, that made for precious moments, …because nothing is quite like gathering with loved ones. ​ ​She was close to her Lord, upheld her obligation to attend Sunday Mass at St. Agnes Church where she always stopped to talk to someone as the congregation met new parishioners upon the merging of St. Anthony and St. Agnes Parishes. ​ Esther’s greatest blessing was to be married to a man who cared for her upon her dementia diagnosis. He stayed right by her side, every day, and he was in it for the long haul. Anthony was grateful to be able to keep her home and safe. And Esther knew the power of love, …real love. ​Esther is survived by her devoted husband, Tony; her children and their loves, Mary and Tom Primero, Michael Marchetta and Julie Cunningham, and Nancy and Scott Fiaschetti; grandchildren, Michael Gasbara; and Luca Fiaschetti, and Marco Fiaschetti; sister and brother-in-law, Frances and Louis Bell; and brother and sister-in-law, William “Bill” and Mildred “Millie” Lenuzza. She also leaves her sister-in-law, Lucy Lenuzza; nieces, nephews, great-nieces, great-nephews, cousins, and the love of the Marchetta family; and the many friendships she cherished throughout the years. She was predeceased by her brother, Robert J. Lenuzza; and an infant brother and sister, Richard Lenuzza, and Julia Lenuzza. ​The family is grateful to Jamie, Candace, and Buddy for their loyal and loving caregiving. ​Relatives and friends are respectfully invited to attend Esther’s funeral service and Celebration of Life which will commence on Friday morning, July 16, 2021 at 10:30 at St. Anthony & St. Agnes Church where her Mass of Christian Burial will be offered. Interment will take place in Calvary Cemetery. In thanking them for their kindness to Esther, memorial contributions in her honor may be made to Hospice & Palliative Care, Inc. online at https://hospicecareinc.org/donate-online/; envelopes will be available at the service.

UTICA - Mrs. Esther Julia (Lenuzza) Marchetta, age 90, passed away on Saturday, July 10, 2021 in the comfort and dignity of her home with her loving family by her side. &#8203;Born in Utica on January 27, 1931, Esther was the daughter of the... View Obituary & Service Information

The family of Mrs. Esther Julia (Lenuzza) Marchetta created this Life Tributes page to make it easy to share your memories.

Send flowers to the Marchetta family.