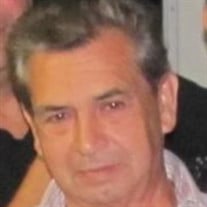 UTICA – Mr. Esteban Bosque, age 82, passed away on Saturday, January 1, 2022, with his loving family by his side. Esteban was born in Arecibo, Puerto Rico on August 3, 1939 to the late Manuel Bosque and Sebastiana Del Rio. There he was raised and educated into his pre-adolescent years, which was followed by a move to Utica as a teenager. Esteban remained here in Utica for over 40 years and then returned once again to his beloved Puerto Rico at retirement. Finally, six months ago, he made his way back to Utica and the states to be closer to family. Esteban entered into marriage with his beloved wife Felicita Torres-Bosque and the pair were married for 38 years. A life-long chef of over 50 years, Esteban was well known for his excellence at his craft. He was most remembered for his position in the 70s as the chef at Horizon Hotel, which he held before going on to accept a position at Fisherman’s Wharf on Bleecker St., where he worked during the rest of the 70s into the 80s. From there, he carried over his career to Valley View Country Club during the late 80s and remained in this position until his retirement in 2001. After retirement, Esteban spent several desirable years on his beloved island of Puerto Rico, where he surrounded himself with family and friends. A man of faith, Esteban believed the Catholic Creed and had attended Historic Old St. John’s Church. Esteban is survived by his beloved wife, Felicita; his daughter, Elizabeth “Lisa” and her husband Joseph S. Ficchi; and his son and spouse, Steven and Carrie L. Bosque. He will be fondly remembered by his six grandchildren, Steven, Andrew, Ian, and Tristan Bosque; and Joe, and Dominick Ficchi; and two great-grandchildren, Roman, and Dominick Ficchi. Esteban leaves behind his step-children, Camille, Elvin, Miguel, Darmy, and Arnaldo Arroyo; and his cherished siblings, four brothers and four sisters, Maria, Lucy, Ana, Tony, Marcelino, and the late Ines, Manuel, and Luis. Esteban shared treasured friendships with his close friends Frank Colon, Willie Velez, Fred Otero, and Pastor Vicente Ventura. The family would like to extend their heartfelt thanks and gratitude to Esteban's ICU nurse, Emily Scholefield, who was truly a godsend in such a difficult time. She went above and beyond her duties as a nurse right until the end. Thank you and God bless you Emily. Visitation will be held Tuesday evening, January 11, 2022 from 5:00 to 7:00 at the Eannace Funeral Home, 932 South St., corner of Hammond Ave. Relatives and friends are respectfully invited to attend Esteban’s Mass of Christian Burial and Celebration of Life on Wednesday morning, January 12, 2022 at 10:00 at Historic Old St. John’s Church, 240 Bleecker St. Interment will follow in Calvary Cemetery. Regardless of vaccination status, face masks are required to remain in compliance with the state and county mask order.

UTICA &#8211; Mr. Esteban Bosque, age 82, passed away on Saturday, January 1, 2022, with his loving family by his side. Esteban was born in Arecibo, Puerto Rico on August 3, 1939 to the late Manuel Bosque and Sebastiana Del Rio. There he was... View Obituary & Service Information

The family of Mr. Esteban Bosque created this Life Tributes page to make it easy to share your memories.

Send flowers to the Bosque family.