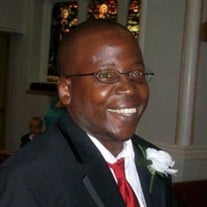 ILION - Mr. Ernest A. “Ernie” Clark, age 49, crossed over on Thursday, August 12, 2021. At the time of his passing, he was in the hearts of those he loved most. Born in Utica on September 16, 1971, Ernest was the son of the late Willie James Clark and Florence Gilmore. He attended Utica schools and was a graduate of T.R. Proctor High School/Class of 1989. Twenty years ago, a young woman named Melissa Waller was drawn to Ernie’s great smile, and they spent ten years getting to know each other. In 2011 they wed, and during their twenty years they were always there for one another, and their close communication was the source of their synergy. Ernie oversaw and taught his nieces and nephews the importance of forming great relationships and honoring family commitments. He also worked as a School Bus Driver for 4 years at Birnie Bus. He cherished his entire family and found pleasure in spending time with them celebrating special days and attending barbecues. They were the days of fun in the sun for the kids as well as the adults, and the 4th of July was a special patriotic day to celebrate. Ernie welcomed each of his children into the world, guided them with rules of logic, and watched over them with care and concern. He wanted them to know love and respect, and in turn, each of them admired and learned from him. He enjoyed spending time with his family and friends, fishing, watching sports especially the Dallas Cowboys football games, and playing X-Box and PS4 with a passion. A charming young man, Ernie had magical ways about him, and his one-liners made everyone laugh. His smile was engaging, his spirit was generous, and his heart was kind ~ gifts that granted him the blessing of many friends. He was proud of being a good husband and a great father, and grateful that he got to accomplish so much during his 49 years. Although he endured longtime health issues, it rarely brought him down. He always rallied back, a testament to his amazing character and determination. Ernie held the Lord close to his heart, and allowed Him to guide his life. Ernest is survived by his soul mate and wife, Melissa; his adored children, Maleak, Malahki, and Mya; his siblings, Lacora “Pat” Gilmore, Margaret “Martha” (Gilmore) and Langley Holmes, Eric Glasper, Dolly Clark, and the memory of his brother, Terry who preceded him. He also leaves his nieces, nephews, great-nieces, great-nephews, an uncle, cousins; mother-in-law and father-in-law, Heather and Michael Waller; in-laws, Tanya Waller, Samantha Waller, and Kasandra Waller and fiancé Riccardo. Ernie was a man who had many loyal and longtime friends, another blessing in his life. The family is grateful to Dr. Amita Butala and staff for the great care they provided Ernie; Dr. Arul Kannan who was amazing; and the staff of MVHS at St. Luke’s Healthcare ICU for their compassionate hearts. Visitation will be held Thursday, August 19, 2021 from 10:00 to 11:30 at the Eannace Funeral Home, Inc., 932 South St., corner of Hammond Ave. Ernest’s Home Going and Celebration of Life will commence at 11:30 at the funeral home upon conclusion of visitation. Interment will follow in Forest Hill Cemetery.

The family of Mr. Ernest A. "Ernie" Clark created this Life Tributes page to make it easy to share your memories.

Send flowers to the Clark family.