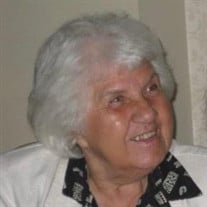 UTICA - It’s with great sadness the family of Elinor Curri (Ellie) shares her sudden passing to be with her Lord on Thursday, April 23, 2020 at the age of 94. Elinor was born in Utica on February 2, 1926 to Harry and Alice Fernandes of Madeira, Portugal who had migrated to America. She was raised and educated in Utica. Elinor or “Vava”, as she was lovingly called by those who loved her, was fiercely devoted to her family and made certain that they were connected to their Portuguese heritage. You’d often hear her speaking Portuguese and sharing traditions to pass along to her children and grandchildren. She enjoyed a long career as a banking professional, starting as a pioneer in her industry as a bank teller at Oneida National Bank and ending 30 years later as a Loan Officer. Even in her retirement, the bank called her back to work part time and she willingly accepted. Elinor was loved and respected by everyone who crossed her path and had the pleasure of knowing her. She was a woman of loyalty, integrity, and honor. Blessed with a special relationship with the Lord that made her vibrant, Vava mentored her family in the same manner. She was a devout Catholic and loyal disciple of God and had the intuition to help others find their love for the Lord through her ministry work. She served as a Eucharistic Minister and Catechist at St. Mary’s Church and later at St. Anthony’s Church. Elinor spent her time in retirement dedicated to volunteering for Hospice and prison ministry. She inspired people with the Lord’s words and changed the hearts of many. Elinor was a bright light for many who needed love and support. Heaven has sure gained an angel and we will miss her, but she will be in our hearts and our souls forever. Elinor is survived by her daughter, Mary Alyce Curri-Kornbluth; son and daughter-in-law, Nicholas and Nancy Curri; her adored grandchildren and their spouses, Mindy and Robert Sherman, Richard and Marie Curri, Daniel and Ashley Curri, Joseph and Alyssa Curri, and Franklin and Isaiah Kornbluth; great-grandchildren, Nicholas, Brayden, Vincent, Trevor, Cameron, Logan, Joseph Jr., Kara, and Lana; and her sister, Mary Leach. Vava would also like to send her love to Jeff and Ana Schneider, Lisa, Stacey, and Sarah Leva, and Marilyn and Dick Wester; and her many lifelong friends. She was predeceased by her brother, Harry Fernandes; and the many, many friends who have gone before her. All funeral services will be held privately. In lieu of floral offerings, donations in Elinor’s memory may be made to Denison Pequotsepos Nature Center, Jules Xavier Schneider Barn, PO Box 122, Mystic, CT 06355. “You are my sunshine”

UTICA - It&#8217;s with great sadness the family of Elinor Curri (Ellie) shares her sudden passing to be with her Lord on Thursday, April 23, 2020 at the age of 94. Elinor was born in Utica on February 2, 1926 to Harry and Alice Fernandes... View Obituary & Service Information

The family of Mrs. Elinor A. (Fernandes) Curri created this Life Tributes page to make it easy to share your memories.

Send flowers to the Curri family.