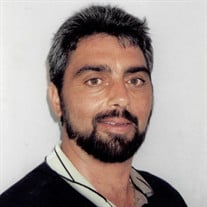 E. UTICA - Mr. Edward “Eddie” John Morgan, age 61, passed away on Monday, April 5, 2021 in the company of his daughters and son-in-law. Eddie battled cancer for 12 years and although cancer was the cause of his passing he would not want it to define him. Proud to have been born and raised in East Utica on November 29, 1959, Edward was the son of the late Andrew J., Sr. and Mary (Nole) Morgan. He was a graduate of T.R. Proctor High School/Class of 1977. Ed then began his working career as a tradesman and carpenter. On September 19, 1986 he was united in Holy Matrimony to Marguerite Siuta at St. Joseph & St. Patrick Church and to that union came the blessing of two daughters, Elizabeth and Rebecca, that were the pride and joy of their lives. His quest to better educate himself journeyed him back to MVCC where he earned an Associate degree in Business in 2013. He then pursued his Bachelor of Arts degree in Business Administration in 2016 at SUNY Polytechnic Institute. Eddie had a very engaging career as a tradesman in the carpentry industry, working with many notable area contractors under the guidance of his father. Always following a dream, he pursued the 4-year accredited apprenticeship to achieve his certification as a master carpenter. He was then elected as the Business Manager of the United Brotherhood of Carpenters and Joiners of America Local #120, a term that began in 1992 and concluded in 2003. During his tenure, the union members could count on Ed to be their fearless negotiator and advocate for the best working conditions and benefits. Eddie then gained employment with the Greg Gates Construction Company, and lastly at J. Priore Construction, Inc. as a field supervisor and an estimator project manager. Sadly, his working years concluded as he began one of his biggest battles - cancer. He beat the odds of his projected diagnosis and was blessed with 12 additional years of life. Ed hoped that he would be remembered as a man who made things happen. He took every journey in life head on and with conviction! He practiced his Catholic faith at St. Joseph & St. Patrick Church. In the last five years of his life, a charitable opportunity presented itself to Ed where he began to serve on the parish council, building and grounds, and on the advisory board to oversee the reformation of Mother Marianne’s West Side Kitchen, under the direction of Father Dellos. With his management skills and carpentry competence he was instrumental in securing grants and donations and raising awareness to the needs of the West Side Kitchen. Through this experience, he learned that the only thing people really wanted in life was to be respected and treated kindly and fairly. Ed thought this was one of the most rewarding jobs he ever had. He was surrounded by a wonderful group of humble people who silently shared their talents and time. This was truly one of God’s works — placing Ed where he needed to be. Edward is survived by his wife, Marguerite; his daughters and son-in-law, Elizabeth Rose Morgan, and Rebecca Ann and Chancellor Coyne, Sr.; and his grandson, Chancellor Coyne, Jr., the joy of his heart. Hailing from a family of 9 siblings, the memories and stories are endless. —Andrew J. Jr. and Suzanne Morgan, Dorothy and David Neri, David and Cindy Morgan, Michael and Suzanne Morgan, Mary Ann Morgan, twins Patricia “Trish” and James LaBella and Patrick and Lisa Morgan, and Christopher and Heather Morgan. He will also be remembered by his 68 nieces and nephews, 51 great-nieces and great-nephews, cousins, especially acknowledging Roseann, aunts, and uncles. He was godfather to Danielle LaBella, David Morgan Jr., Mark Morgan, and Christopher Miller, as well as godfather and Confirmation Sponsor for Jonathan, Paul, and Mike Maneen, with whom he had a special bond. He also leaves his mother in-law, Bernadette Siuta, and in-laws Ramona and Carl Scaramuzzino, Martin Siuta, Christine Miller, Elizabeth and Stephen Graham, Daniel and Rosalie Siuta, Anthony Siuta, and Andrew Siuta. He will be embraced in heaven by his granddaughter, Nona Jude Coyne; and his cousin, John Maneen who was more like a brother. He was preceded by his parents and father in-law, Raymond Siuta. He also leaves the friendships and compassion of many dear people who blessed his life including his friends of more than 50 years, Henry Talarico, Steve Reynolds, Judge Jim Betro, and Mark Guarniero; he could not have asked for better cohorts. During Eddie’s 12 year journey with lung cancer, there were numerous special people who were present to him at different times. Ed was so proud to have been a patient of Dr. Atul Butala. He thought of him as a great physician and personal friend. If it were not for the kindness, the compassion, and the ultimate encouragement of the Regional Cancer Center staff especially Tanya, Maryann, Laura, Becky, and Annie, Ed could not have made the years he needed treatment, for they were clearly people who he called friends. And lastly, the amazing outreach work of Hospice and Palliative Care. Visitation will be held Monday morning, April 12, 2021 from 10:00 – 12:00 at St. Joseph & St. Patrick Church, 702 Columbia Street. Family and friends are respectfully invited to attend Edward’s funeral service and Celebration of Life which will commence Monday afternoon at 12:30 at the church where his Mass of Christian Burial will be offered. Face masks covering your nose and mouth are required and social distancing and contact tracing will be implemented. In lieu of flowers, donations in Ed's memory may be made to Mother Marianne’s West Side Kitchen at St. Joseph & St. Patrick Church, online at https://mmwsk.org or by mail to 702 Columbia Street, Utica, New York 13502. Envelopes will also be available at the service. Interment will take place in St. Joseph’s Cemetery at the convenience of the family. During this time of social distancing that we are all experiencing, please take a moment to connect with Ed’s family through the “Memories” section of his obituary. Our prayers go out to all as a sign of our continued support.

E. UTICA - Mr. Edward &#8220;Eddie&#8221; John Morgan, age 61, passed away on Monday, April 5, 2021 in the company of his daughters and son-in-law. Eddie battled cancer for 12 years and although cancer was the cause of his passing he would not... View Obituary & Service Information

The family of Mr. Edward "Eddie" Morgan created this Life Tributes page to make it easy to share your memories.

Send flowers to the Morgan family.