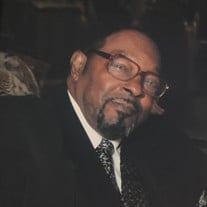 UTICA - Mr. Eddie Roosevelt Fite, age 78, went home to the Lord when he passed away peacefully on Wednesday, April 22, 2020 with those he loved most in his heart at the MVHS Rehabilitation & Nursing Center. Born in Gastonia, North Carolina on August 26, 1941, Eddie was the son of the late Leroy and Janie (Patton) Fite. He grew up in Charlotte and attended East Side High School where he lettered in 3 sports, basketball, football, and baseball. When he came to Utica, he enrolled at Utica Free Academy where he excelled at basketball and was known as “the Michael Jordan of the team”. He had a natural quest for knowledge which followed him throughout his life. After a whirlwind romance and a year-and-a-half relationship, he wed the former Barbara Jean Bracey on May 9, 1992. They shared common values and mutual honesty, and their union was a blessing for each of them. Eddie began his working career at the FX Matt Brewing Company as a driver and advanced to the position of Foreman for the distribution of their product. He retired in April of 1992 after a fulfilling 32-year career. During his retirement, Eddie gave his time and efforts to the T. Revels-Gibson Funeral Service. He met the needs of the community by sharing his compassion which was of great importance to him, and he was beloved for his kindness. His gentle soul and compassionate heart made him unique. He had a great sense of humor, and Eddie spoke the truth. He was a wise man, but he often let his pride and stubborn streak get in his way! He was happy to help area youth and adults to prepare for their GED testing. And could he mentor! His sense of commitment made an impact on many. Eddie loved the sport of bowling, and he participated in many leagues and tournaments. He also enjoyed playing the card game Tunk, only at $1.50 a hand! Holidays were spent in Yonkers with Barbara’s family who Eddie adored, as well as in Virginia with “his daughter” Nadine and her family. His marriage to his wife Barbara was his greatest accomplishment, and their life together was comfortable because they had each other. He was a man of humility and many blessings, because the Lord made his life meaningful and magical. Eddie was a member of the Elks Lodge, the Terrace City Lodge #690, a fraternal organization dedicated to deserving causes, with a mission to assist the needy of the community through food drives, fund raising, and benevolent programs. Eddie lived by the motto of the Elks USA, “Kindness is not an act it’s a lifestyle”. He was a worldly man who became a Preacher’s Steward. Eddie put his hopes, his heart, and his humanity in the faithful flock of his parish Hope Chapel A.M.E. Zion Church where he humbly served as an Usher, as secretary of the Men’s Club, and then as a Steward, a trusted position as President of the Laity of the Albany District. He also served as Co-President of the Western New York Conference, and Marshall keeping order for the Bishop, the highest honor attained by a lay person. Eddie was grounded in the Lord and was a true Christian, and as his illness prevented him from continuing his ecumenical responsibilities, he meditated and prayed to the Lord. It was then that Eddie was confident that “God knew the work that he did in his vineyard”. Eddie is survived by his devoted wife, Barbara Jean; his children, Barbara’s daughter Nadine Bruce and her family. As a couple, they loved Derrick George as if he were their son. He also leaves numerous grandchildren and great-grandchildren; his sister, Margaret Louise Wright; nieces and nephews, especially Stanley and Lois Fite, and Elizabeth Wright; great-nieces, great-nephews, cousins; sisters-in-law, Debra Fite, and Brenda Bracey; and a host of friends throughout his life including Jimmy Warmack, James and Margaret McNeely, and many who have gone before him. May they all be reunited and at peace. He was predeceased by his brothers and sisters-in-law, Herbert and Mary Lena Fite, Alfred and Beatrice Fite, Bobby Fite, and Shirley Fite whom he loved so dearly; and his father-in-law, James Bracey. The family is grateful for the dedication of the staff at the MVHS Rehabilitation and Nursing Center (St. Luke’s Home /Barton West), especially nurse Rachel, and aids Akeema and Bertha; and the love and support of their Pastor Reverend Sharon Baugh and Reverend Robert E. Williams. Due to current health concerns and in keeping with state and federal regulations, services will be held privately and interment will take place in Forest Hill Cemetery at the convenience of the family.

UTICA - Mr. Eddie Roosevelt Fite, age 78, went home to the Lord when he passed away peacefully on Wednesday, April 22, 2020 with those he loved most in his heart at the MVHS Rehabilitation & Nursing Center. Born in Gastonia, North Carolina... View Obituary & Service Information

The family of Mr. Eddie R. Fite created this Life Tributes page to make it easy to share your memories.

Send flowers to the Fite family.