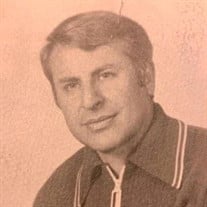 UTICA - Mr. Duilio “Dewey” Ragonese, age 92, was reunited with his son Vinny when he passed away on Sunday, May 3, 2020 at the Katherine Luther Residential Health Care and Rehabilitation Center. Born in the town of Castelforte, province of Latina in the Lazio region of central Italy, Duilio was the son of the late Vincenzo and Caterina Ragonese. As a young man, he migrated to Canada and then relocated to Utica. On January 6, 1952 he married the former Emma Fallone, his childhood sweetheart. They were great companions who shared common values and made a wonderful life for themselves and their family. Their marriage spanned just over 68 years. An accomplished carpenter, Dewey worked for a number of area construction companies including S & D Construction, until his retirement in 1990. With an aim for perfection and attention to detail, he rose early in the morning to a job he enjoyed. He felt a great sense of accomplishment in his decades long dedication to his craft and career. His life was made rich by his Italian culture, including his love of vegetable gardens and his many fig trees. He tended to them with care, and they returned the favor by producing a bountiful harvest that he shared with family and friends. He also enjoyed fishing and hunting, not only as a sport, but also as a source of food for the dinner table. A genuine family man, Duilio wanted the best for his loved ones and he was proud that he had many friends who could go to him if they needed anything. He was ahead of his time, and he understood the problems that the world currently faced. He was a strong willed man who strived to live by the values that were so important to his generation. Many may not know that he attended classes at Munson-Williams-Proctor Arts Institute that brought out his creative eye and visual artistic abilities in sculpting stone! He adored his children and grandchildren, and left them a lifetime of wisdom and time-honored values that guided him through his journey — and will guide them through theirs. Duilio is survived by his beloved wife, Emma; and his daughter and son-in-law, Diana Stevenson and Robert Moore. He always held his son Vinny’s passing close to his heart and he was always on his mind; (November 6, 2003). He also leaves his grandchildren, Katie and Matthew Grinneil; Dewey Ragonese, Eric Lawless, and Michael Brown; his great-grandchildren, Isla, and Emma who loved him very much, and he, them; his nieces and nephews, especially acknowledging Angela Di Paola, and Giovanna and Frank Vezza; great-nieces. great-nephews; sister-in-law, Mary Fallone; and family friends, Cecelia and Ronald Gouse. He was predeceased by his siblings and their spouses, Raffael and Maria Ragonese, Emma and Antonio Falso, and Emilia and Salvatore Vezza; and in-laws, Angelo and Graziella Fallone, Quirna and Alexandro Rosato, Carmella and Severino Di Paola, and Arthur Fallone. The family extends sincere appreciation to the staff of MVHS at St. Elizabeth Medical Center/Special Care Unit, especially Jody, who were an extension of the family’s love for Dewey; and the personnel of the Katherine Luther Residential Health Care Center/Willow Way and Gordon Units for their compassionate, understanding ways, and being close to Dewey when his family could not. Due to current health concerns and in keeping with federal and state regulations, services at Calvary Mausoleum will be held privately. Please take a moment to connect with Dewey’s family through the “Memories” section of his obituary on our website. Our prayers go out to all as a sign of our continued support.

UTICA - Mr. Duilio &#8220;Dewey&#8221; Ragonese, age 92, was reunited with his son Vinny when he passed away on Sunday, May 3, 2020 at the Katherine Luther Residential Health Care and Rehabilitation Center. Born in the town of Castelforte,... View Obituary & Service Information

The family of Mr. Duilio "Dewey" Ragonese created this Life Tributes page to make it easy to share your memories.

Send flowers to the Ragonese family.