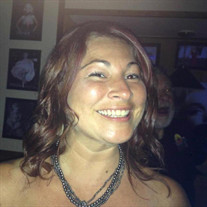 ROME/LARGO, FL – Donna M. Gowett, age 45, after being diagnosed with lung cancer, went home to the Lord and was welcomed by her dad and sister on Saturday, June 12, 2021. She passed in the comfort and dignity of her sister and brother-in-law’s home surrounded by those who had been so touched to care for her. Born in New Hartford on August 26, 1975, Donna was the daughter of Frances J. (Russell) Gowett and the late Thomas H. “Tom” Gowett. Raised and educated in Rome, she was a graduate of Rome Free Academy/Class of 1993. She completed her studies and courses at MVCC in the Nursing Program and in May of 2016 she earned her credentials as a NY State Registered Nurse. She worked locally at the Oneida Center for Rehabilitation and Nursing until she moved to Florida where she also practiced nursing until she became unable to work. Donna was always close to her parents and she was a loyal and fun-loving sister. Her nephews were so special to her heart, and she loving having talks and finding time to share with them. Her friends were important and the many good times they had all together were so memorable. She loved to dance, and her genres of music to dance to were songs from the 80’s and 90’s. She shared a “family trait” of needing her sleep and then, on to the next adventure. Numerous cups of coffee got her moving, and Dunkin’ was a favorite! She never found the winters up north to be enjoyable, so she relocated to Florida, and at that time her dad was ill and she cared for him there. She remained in Florida, loving the warm climate, the ocean, and the sun. She loved a cold brew, margaritas, and her cigarettes, which she enjoyed to the end! She socialized so very gently, and also tended bar at several taverns where she knew the “regulars” by name. Donna had a carefree attitude that allowed her not to worry unnecessarily. She took one day at a time and appreciated the kindness of others. She chose a vocation that was very demanding, understood the responsibilities, and did her best in tending to her patients. Above all else, Donna was a determined soul and she felt fulfilled and gratified in her chosen profession which was very challenging. She often spoke of how much she missed caring for others. She was happy about the life she lived, the lives she touched, and the permission she gave herself to be the competent, compassionate, and caring person she became. Donna is survived by her mom, Fran with whom she shared a home and watched over one another; her sister and brother-in-law, Jennifer A. “Jenn” and David M. Viti Sr.; and the memory of her sister, Tracey J. Gowett who preceded her in death on April 12, 2004. She was also loved by her nephews and niece, David M. Viti Jr., Matthew Thomas Viti, and Jeana Viti and fiancé Rob Hofler and their children, Alivia and Anthony; her aunts and uncles, Sue and Lynn Dote, Sharon Gowett-Calhoun, Sandy Lindsay, Patricia “Patti” and Harold “Butch” Eddy, Timothy “Timmy” Gowett, James and Mary Gowett, and Barbara Balio; numerous cousins; and best friend, Charlene Kuss, and Terry Denton who was always in her heart. She was so comforted to be able to see these special people when she returned home! She was predeceased by her maternal grandparents, Harry W. Russell and Anna Marie Alibozek-Russell; and paternal grandparents, Ralph and June Gowett. Jenn and Fran extend their gratitude to the personnel of Hospice & Palliative Care, Inc., especially the outstanding care and vigilance of RN/Crystal, Kristie, and the entire staff who tended to Donna’s needs in such a loving way. Jenn and Dave are also very appreciative of the love and support provided by their family and friends. The family will be receiving relatives and friends on Monday, June 21, 2021 from 4:30-6:00 at the Eannace Funeral Home, Inc., 932 South St., corner of Hammond Ave. Donna’s Memorial Celebration will commence Monday evening at 6:00 at the funeral home. Those wishing to express an act of kindness in Donna’s memory may make a memorial donation to Hospice & Palliative Care, 4277 Middle Settlement Road, New Hartford, NY, 13413 online at https://hospicecareinc.org/donate-online/. Envelopes will be available at the funeral home.

ROME/LARGO, FL &#8211; Donna M. Gowett, age 45, after being diagnosed with lung cancer, went home to the Lord and was welcomed by her dad and sister on Saturday, June 12, 2021. She passed in the comfort and dignity of her sister and brother-in-law&#8217;s... View Obituary & Service Information

The family of Ms. Donna M. Gowett created this Life Tributes page to make it easy to share your memories.

Send flowers to the Gowett family.