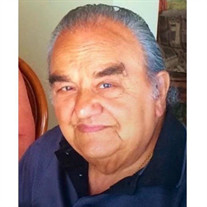 UTICA - Mr. Donato P. “Don” Colucci, age 89, passed away on Friday, May 21, 2021 in the comfort and dignity of his daughter’s home with his loving family by his side. Born in Utica on February 1, 1932, Donato was the son of immigrant parents from Monopoli, Italy, Thomas and Filomena (Esposito) Colucci. He attended Brandegee Grammar School and was a graduate of T.R. Proctor High School. A proud veteran of the United States Army, Don honorably served his country during the Korean Conflict stationed stateside in San Antonio, Texas. His baking skills were seen at an early time in his career as he designed master-class cakes and received honors from government officials that were duly noted, even from the President! On October 5, 1956 he married the former Mary Lou Steppello with whom he shared 52 years in love and partnership in both their personal and work lives. Don was a traditional husband and father, and their love was a fine example for their kids to emulate. Family came first, always! Don missed and dreamed of his love, Mary Lou, since her passing on January 31, 2009, and the family takes comfort in knowing they are reunited for eternity. The couple met at DiCuffa’s Bakery where they both worked. They then became “partners in crime” and established, owned, and operated Colucci Pastry Shop, Scholls, DeVito’s, Rosato’s, and lastly Donato’s, …and this was where the recipes for Tomato Pie, sizable Chocolate Chip Cookies, and the Original Manny’s Cheesecake originated in the Utica area! Don also managed the Grand Union Supermarket Bakery Department, and Dan Dee Donuts on Genesee Street. It was because of his experience and desire to mentor that he never hesitated to help any locally-owned bake shop to initiate their business, and he was held in great regard in this city for his talents and benevolence. A hard worker, Don put his heart and soul into his craft and business ventures. At the same time, he was loyal to his family and their needs. Being in the company of his children was so comforting to him, and the grandchildren always had a way around their grandparents who idolized them and were so proud of their accomplishments. Don and Mary Lou knew each of their grandkids individually, were involved with all of them, but never compared any of them. The only disappointment they had was that they never got that pony! Don enjoyed gardening ~ vegetables, flowers, and grape vines, a peaceful pursuit that brought a cathartic, restorative, wholesome pleasure with the sun on his face and his hands in the soil. Family was always Don’s priority, and he planned an annual vacation to spend time together. Sunday Mass followed by Sunday dinners was just another meaningful custom. Holidays were honored, and the Feast of the Seven Fishes was a Christmas Eve must. Don was also the one who created the sauce, sausage rolls, fried dough, and all the food, in abundance, with care packages, to go. Some of the things that Don found to be fulfilling were dancing with Mary Lou, watching Yankee baseball games with his kids, and taking rides to see the latest progress in the growth of Utica, his beloved city. Don was a member of the Disabled American Veterans, the American Legion Post #229, and the Baker’s Food and Allied Union. He was raised by parents who taught him virtues and valuable lessons of life, and his children now embrace those traditions and are so grateful to have been raised by such a great man. His humor shined in memorable comments, sometimes sweetened with sarcasm, but with a smile behind them. Laughter lived in his light-hearted take on life that made him insightful, charming, and adored by peers, pals, and people, in general. He also had a place in his heart for dogs. He always had multiple pets in his home, and he treated each of them as family. He was truly a “Dog Whisperer” and the original “Princess” was his baby. In all phases of his life, he was organized, disciplined, routined, and his hospitality was so evident when he welcomed people to his world, to share his craft, conversation, and cheer! A communicant of St. Mark’s Church, Donato was a devout Catholic and the Sacraments were important to him. He was a long-hauler COVID survivor, and he knew the Lord was by his side and blessed his soul to heaven, when it was time to go home. Donato is survived by his daughters and sons-in-law, Donata Colucci Arcuri and the memory of his son-in-law Louis R. “Louie” Arcuri who passed on January 4, 2015, Philomena and William Gerstner III, and Dana and Christopher Gonzalez; and his grandchildren, Giavanna Marie Gerstner, Santina Rose Gerstner; Amaris Danielle Gonzalez, Christopher Luis Gonzalez, Ariana Grace Gonzalez, and Krislyn Nicole Gonzalez. He will remain in the hearts of his nieces, nephews, great-nieces, great-nephews; cousins, especially Geno Esposito and family in Bari, Italy; sisters-in-law and brothers-in-law, Philippa and Roger Palek, Sharon L. Steppello, and Louis Steppello; and his loyal friends who kept in contact with him, Anthony Durso, Joe Spano, and Howard Armstrong; and the memory of many friends who preceded him. He was predeceased by his brothers and sister-in-law, Dominick and Anna Colucci, and Vito Colucci; his in-laws, Donald F. “Bena” Steppello, and Lorraine M. “Lar” Curriere; and his niece, Carm Graziano. The family is grateful to Dr. Fred Talarico and staff for their support and guidance; and Deacon Richard E. Prusko for his spiritual support and solace. Visitation will be held Friday morning, May 28, 2021 from 10:00-11:15 at St. Mark’s Church, 440 Keyes Road in N. Utica; his mass of Christian burial and Celebration of Life will commence at 11:30. All COVID protocols will be followed. Donato’s Rite of Committal and Interment beside his wife Mary Lou will take place graveside in St. Agnes Cemetery at the convenience of the family. Please take a moment to connect with Don’s family through the “Memories” section of his obituary. Our prayers go out to all as a sign of our continued support.

The family of Mr. Donato P. "Don" Colucci created this Life Tributes page to make it easy to share your memories.

Send flowers to the Colucci family.