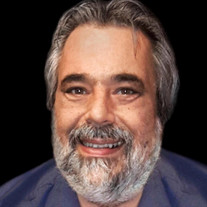 California/Utica- Mr. Dominick F. Talerico, Jr., age 64, a native Utican, currently residing in Corona, California, passed away on Monday, April 12, 2021 at UCSD Hospital in San Diego. At the time of his passing his loving wife, and nephew Billy were by his side. Born in Utica on March 14, 1957, Dominick was the son of the late Dominick J. Sr. and Louise M. (Carchiani) Talerico. He was raised and educated locally. In 1980 he relocated to Covina, California where he met his love. It was on November 24, 1984 that he married the former Mauri Irvine; they shared nearly 36 devoted years together. He was a loving and gentle husband who was always there for his family. Dominick was employed as an Independent Contractor for Hunsaker and Associates, very skilled at renovating and painting their offices and commercial buildings for over 30 years. He had a passion for cooking, trying his hand at numerous Italian recipes. Special memories were created with his sister and he so enjoyed going with her to the casino. His heart was true to his hometown Utica, where he loved to come to visit his family and friends. After raising his children, he was invigorated and renewed when he helped to raise his grandchildren. He was recently looking forward to coming back home to Utica to enjoy his retirement years. Dominick is survived by his beloved wife, Mauri, and her children Christy and Erin who he raised as his own; grandchildren, Ryan, Tyler, and Willow; Kaliah, Kianna, and LJ; great-grandchildren, Maurice, and Maliah; sister and brother-in-law, Cindy and Daniel A. Klockowski; many nieces and nephews, especially Daniel D. Klockowski, Jr., and Kristin A. and Nicholas Colucci; great-nieces, Ava, and Ariana Colucci; great-nephews, and cousins. He will be remembered by his childhood friends with whom he remained in contact, Jim Lewis, Pete Dubyna, Dan Shaheen, and Sal Inserra. He was predeceased by his paternal grandparents, Peter and Olivia Talerico; his maternal grandparents, Luigi and Concetta Carchiani; many aunts, uncles, cousins; and his mother-in-law, Martha Irvine. The family extends sincere appreciation to Dominick’s cousin, Dr. Carol Stewart who was so supportive during their time of need. Relatives and friends are respectfully invited to attend Dominick’s Memorial Mass of Christian Burial which will be held on Saturday morning, June 26, 2021 at 10:00 at St. John the Evangelist Church. The family will receive visitors at the conclusion of Mass. Please omit floral offerings. Interment will take place with his parents in St. Agnes Cemetery at the convenience of the family.

The family of Mr. Dominick F. Talerico Jr. created this Life Tributes page to make it easy to share your memories.

Send flowers to the Talerico family.