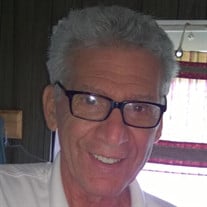 UTICA - Mr. Dominick A. “Dick” Colangelo, Sr., age 78, passed away peacefully on Monday, August 24, 2020 after a brief illness, with his family by his side. Dominick, affectionately known by his granddaughter as “Pop”, was born April 21, 1942 to the late Vito and Mary (Florenze) Colangelo. Dick was fortunate to have had his dad live with him during the last few years of his life, and they spent a lot of time with the family dog and tending to the garden. In 1974, his son and best friend, Dominick Jr. “Dickie” was born. To add to his loving family in 2011, Dickie married Jerri (Lawrence) Colangelo and Pop’s most prized and loved granddaughter Gianna Rose Colangelo was born in 2012. Dick worked at General Electric Company, Indium Corporation, and Utica City Schools where the majority of his career was spent at Hugh R. Jones School. He was an avid bowler bringing Dickie along with him every week. In his last year before retiring from bowling, they bowled on the same team, with Pop being Dickie’s biggest fan and the most excited when he got to see Dickie bowl his first 300 game! Dick played softball and umpired for area leagues for many years. He was an avid fisherman with his fishing buddy Chuck Coppola. Dick loved his hunting camp with Al Napoli and car races with Vinny Maugeri; and he missed those guys so much. He enjoyed coffee, doughnuts, meatballs, and whatever else came their way many mornings with his buddies at Meola’s. Dick is survived by his son, Dominick Jr. and wife Jerri (Lawrence) Colangelo, and his most cherished granddaughter, Gianna. Dick will be missed by his loving and caring sisters, MaryAnn (Gary) Buckpitt, and Carm (Donald) Whiting and their families. Pop will also be missed by his four-legged best buddy, Butch. We would like to thank all of the special staff at the Sitrin Rehab Center for the care, compassion, and their dedication to be sure the patients and families feel comforted and well taken care of. Visitation will be held Sunday from 2-4 at the Eannace Funeral Home, 932 South St., corner of Hammond Ave. Due to the current restrictions, we will be operating at a limited occupancy. We ask for your patience as we try to accommodate those coming to support the Colangelo family. Face masks must be worn and contact tracing will be implemented. A final blessing of farewell will be offered at the conclusion of visitation. Expressions of sympathy in lieu of flowers may be considered to Hospice & Palliative Care online at hospicecareinc.org. Envelopes will also be available at the funeral home. Interment in Holy Trinity Cemetery will take place at the convenience of the family. Please take a moment to connect with Dick’s family through the “Memories” section of his obituary. Our prayers go out to all as a sign of our continued support.

The family of Mr. Dominick A. Colangelo Sr. created this Life Tributes page to make it easy to share your memories.

Send flowers to the Colangelo family.