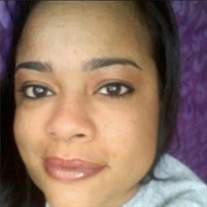 UTICA - Devri Ann JapN-gie, age 51, went home to the Lord unexpectedly when she passed away on Saturday, January 23, 2021. Born in Bay Shore, Central Islip, New York on June 3, 1969, Devri was the daughter of Elga Ortiz and the late Celestino JapN-gie. Devri relocated to Rochester in 1993 with Leroy and their two children and had their third child in 1997. The journey also included 24 dogs! It was there that they made friends that became family to this very day. A short stay in Georgia was followed by their return to Long Island. Then the opportunity to buy a house in Utica presented itself and came to fruition where they were comfortable raising their family and giving their children greater opportunities. Devri and Leroy shared a loving and caring relationship of sixteen years, and although they had some crazy times and their ups and downs, she always had Leroy’s back. They were proud of their three amazing children. Devri worked as a Home Health Aide with a preference for working with the elderly and their needs. She worked in various jobs over the years including Met Life, Utica Cutlery, and with her love of animals, she also worked for area veterinarians. In all her positions, she endeavored to carry out her duties and responsibilities to the best of her ability. Because she was passionate about life, Devri persevered in challenges it presented to her, and made the best of it. She had a loving heart for her children, always ending a call and conversation with “I love you” to each of them individually and addressing any of their needs with special care. She was the protector of her family, and she had each of their backs. Gentle and welcoming, Devri extended unconditional love. No matter what might happen in their lives, she was always there for them. She was the rock of the family. As life continued, she was blessed with two grandchildren, and she would hope that these two little ones will always keep her in their memory! She nurtured her children, and when they played sports she was front and center, whether at football, baseball, basketball, or soccer. She was an advocate for them to be the best! She was a coach of T-Ball when they were little, and her voice was heard above all. She rooted them on and was their biggest cheerleader. Devri grew up in a Christian household, practiced various religions, and she was a member of the Kingdom Hall of Jehovah’s Witnesses. It may have been her beliefs that carried her through to be an inspiration to others, as well as protected her. No matter what adversity she faced, she tried to focus on the love of her family, and she lived her life to the fullest on her own terms. Friendships mattered to her, and her open-door policy made her the coolest mom. Karen Taylor was her best friend, and these two families lived as one, embracing multicultural cooking and diverse meals. Devri’s preference and preparation of soul food was learned from Leroy and his grandmother, …and off she went! She loved to feed others, and her ultimate accomplishment was her ability to offer plates to the community. Competitive, annoying, and fanatical, Devri loved her teams and the sports she rooted hard for including the New England Patriots and the Chicago Bulls, thus, her son was named after the greatest basketball player of all time, Michael Jordan. From her childhood, Devri had an affinity for many animals, and even a raccoon was part of the crew! She was a breeder of pit bull terrier dogs, and if you were the recipient of any of her pups, you were part of her family, as all good breeders do. She was truly an ‘animal whisperer’ who received good vibes from her canines, and was like a mother to all God’s creatures. Devri is survived by her daughter, Angelia “Angel” JapN-gie; sons, Leroy Delaney, Jr. and Latoya Jenkins, and Michael Jordan “Mikey” JapN-gie; and the father of her children, Leroy Delaney; her grandchildren, Domani Yorey, and Lyla Arielle; her mother Elga; and her siblings, Kim Saur, Cappy JapN-gie, and Jason JapN-gie. She also leaves her nieces, nephews, great-nieces, great-nephews, cousins, aunt, uncle, and friends, Karen Taylor, 30 years later, still besties; and to all who may have helped her through these times whether unbeknownst to others; their kindness will never be overlooked. The family will honor and commemorate Devri’s life at a private time. In awareness of everyone’s safety during the COVID-19 pandemic, the family has chosen to hold a future gathering in Devri’s honor when it is safer for all to be together. During this time of social distancing that we are all experiencing, please take a moment to connect with Devri’s family through the “Memories” section of her obituary. Our prayers go out to all as a sign of our continued support.

UTICA - Devri Ann JapN-gie, age 51, went home to the Lord unexpectedly when she passed away on Saturday, January 23, 2021. Born in Bay Shore, Central Islip, New York on June 3, 1969, Devri was the daughter of Elga Ortiz and the late Celestino... View Obituary & Service Information

The family of Devri Ann JapN-gie created this Life Tributes page to make it easy to share your memories.

Send flowers to the JapN-gie family.