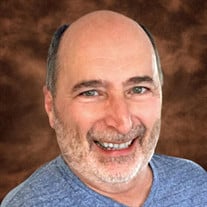 WHITESBORO - Mr. David Albert Santopietro, age 71, passed away on Wednesday, February 9, 2022 with his loving wife by his side. Born in Utica on May 13, 1950, David was the son of the late Teobaldo G. “Ted” and Betty Jane (Dunn) Santopietro. He was raised and educated in Utica and Whitesboro and was proud to serve his country in the United States Army Reserve. On September 20, 1975 he married the former Catherine “Chich” Brockway. They shared 52 years ~ theirs was a wonderful life filled with beautiful memories. In 1973, David began his vocation as a pioneer in dental technology with Biogenic Dental Laboratory, a distinguished career that spanned 48 years, and continued up until his illness at which time he served as President of the company. He was a mentor to co-workers and trained many technicians. His technical acuity and affiliation with doctors set the groundwork for Biogenic to build a corporation beyond compare. As the patriarch of his family, David was amazing, loving, and blessed with a beautiful sense of humor. He loved all the kids in his life — his children, grandchildren, and their friends, as well as his nieces and nephews. All the kids ran to him with open arms because no one was as fun as “papa.” He was active as a coach and fan for the sports his two generations pursued. He was a father-figure and friend to all he met, and was always available to meet the needs of his loved ones. He completed everything from simple chores around the house to complex construction. This labor of love was evident in the scars on his hands and arms. He would drop everything to help anyone that was in need. David was graced with a heart of gold, and lived each day of his life with honor and integrity. A parishioner of the Catholic Community of Whitesboro at St. Paul’s Church, David placed his trust in God's promise of eternal life with Him. David is survived by his wife, Cathy; daughters and sons-in-law, Kristy and Steve Martin, Carrie Santopietro and Charles Croons, and Kelly and Robert “Bob” Cenname; grandchildren, Bryce Martin, Carter Martin; a grandson expected in April; and Alexandra, Ella, Jake, Brett and Marcus Cenname. He also leaves his sisters and brothers-in-law, Dawne M. Santopietro, and Carol A. and Sonny Cirasuolo; nieces and nephews, especially acknowledging Amy and Michael Cornell, Aaron and Regan Cirasuolo, Abigail Cirasuolo, Katherine Cirasuolo and Travis Woods, and Adrienne and Don Murphy; great-nieces, great-nephews, many special cousins; in-laws, Annabelle Kerwin, and Betty “Pudge” and Dan Carney; and many wonderful, faithful friends. He was predeceased by his sister and brother-in-law, Jane “Dudy” and Robert Coleman; brother-in-law, Don Kerwin; and father-in-law and mother-in-law, George and Anna Brockway. The family is grateful to the doctors and nurses at MVHS at St. Elizabeth Medical Center for their care and compassion; the staff of Montefiore Hospital in the Bronx for taking a chance with medical treatment when no others would; and to the Mercy Flight of Buffalo emergency air transport team for their passion and precision in performing their medical mission. Special thanks to his daughter Kelly and son-in-law Bob for working tirelessly to care for him and advocate for his medical needs; you are our angels. Visitation will be held Wednesday afternoon from 4:00-7:00 at the Eannace Funeral Home, Inc., 932 South St., corner of Hammond Ave. Flowers are graciously accepted. The family asks that you consider a memorial donation made in David’s honor to The J-Rob Foundation, Inc., online at www.jrobfoundation.com/support.html; envelopes will be available at the service. David’s funeral service and Celebration of Life will commence on Thursday morning at 11:30 at the Catholic Community of Whitesboro at St. Paul’s Church where his Mass of Christian Burial will be offered. The family requests masks be utilized at the funeral home and church. Interment will take place in Westmoreland Union Cemetery at the convenience of the family.

The family of Mr. David Albert Santopietro created this Life Tributes page to make it easy to share your memories.

Send flowers to the Santopietro family.