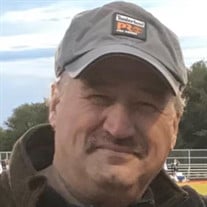 FRANKFORT – Mr. David J. Banas, age 56, passed away unexpectedly Tuesday morning, February 15, 2022, in the comfort and dignity of his home. David was born in New Hartford on February 1, 1966, to the late Richard and Carmela (Mutalo) Banas. He was raised and educated locally, a graduate T.R. Proctor High School. David shared a loving and devoted relationship of over 30 years with the love of his life, Christine M. LaBarbera. David was a very caring man, and moreover, a loving and caring partner. He took great pride in providing for those he loved. David was a professional Truck Driver by trade earning his CDL while with Coca Cola eventually leaving for a position pulling doubles for HP Hood LLC; it was from this position that David retired. David was a contributing member to the Teamsters Union. David’s life was filled with many loves of varying kinds. David loved his children and took immense pride in them and how they were developing. In his early years, he loved to be out on the water, either in a boat or water skiing. During those years, he also loved to hunt and enjoyed being in the woods. Later in life, David loved to cook and share his meals with others, especially with his favorite and most prized “sausage in the oil.” He loved his dog Xena and his cat Rosie, and enjoyed hanging out with them so much that it was a common sight for people to see him driving around with them in his car. David loved socializing, reminiscing, and laughing. He was no stranger to humor, and was known for his vivacious capacity to make anyone, especially his Christine, laugh, leaving his listeners with an incredible story. A man of charisma, David had such an uncanny way about him that those who loved him know “to have met him would be to gravitate to him and his energy and to never forget him.” David is survived by his beloved Christine; his cherished daughters, Cassidy Banas, and Hannah Banas; and his son, John Banas. He will be fondly remembered by his brothers and their wives, Wayne and Barbara Banas, Robert and Susan Banas, Paul Banas, and Daniel “Danny” Banas. David leaves behind Christine’s dad, Salvatore “Sal” LaBarbera, Sr. He shared many treasured friendships with numerous wonderful people. David was predeceased by his nephew and friend, Scott Banas; his friend, Thomas Garguilo; and Christine’s mom, Dottie LaBarbera. The family would like to extend their gratitude to the Frankfort Volunteer Fire Department along with other First Responders for their efforts. The family will honor and commemorate David’s life privately. Relatives and friends are respectfully invited to attend David’s Mass of Christian Burial and Celebration of Life on Wednesday morning, February 23, 2022 at 11:00 at Mary, Mother of Our Savior Parish, Our Lady of Lourdes Campus, 2222 Genesee Street. The family will receive visitors at the conclusion of Mass.

FRANKFORT &#8211; Mr. David J. Banas, age 56, passed away unexpectedly Tuesday morning, February 15, 2022, in the comfort and dignity of his home. David was born in New Hartford on February 1, 1966, to the late Richard and Carmela (Mutalo) Banas.... View Obituary & Service Information

The family of Mr. David J. Banas created this Life Tributes page to make it easy to share your memories.

Send flowers to the Banas family.