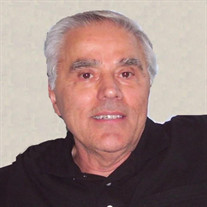 NEW HARTFORD – Mr. Daniel J. Arcuri passed away peacefully on December 12, 2020 at age 84. “Danny” was a lifelong resident of the Utica area where he spent the majority of his life protecting the community as a law enforcement professional. Danny’s family lived in Utica where they operated a successful dry cleaning business, Carl Cleaners. Danny and his family all spent time pitching in at the dry cleaners and working to support the family business. When Danny was a teenager, he joined the military with the goal of keeping his country safe from harm. That goal followed him throughout his life as he pursued his career path. While most people choose to run away from danger, Danny joined the NY State Police where many times he ran towards danger so others could remain safe. He had an impressive career with the State Troopers moving up the ranks until he became the Senior Investigator of the BCI unit. Danny or “Chief” as his peers called him, dedicated his career to solving the toughest crimes and protecting the most vulnerable in his community. He never looked for accolades or praise. He just wanted to do an honest job while he represented the NY State Police. It’s just who he was and everyone who loved him knew that. After Danny retired from the State Police he continued his career working for the Federal Marshall and then served as Town Justice in New Hartford. Law enforcement was in his blood until the day he left this earth! When Danny was finally retired from law enforcement he enjoyed golfing with the guys, traveling with his wife Rosemary, and helping out at his son Dan's restaurants. You could always find him there mowing the lawn, painting a wall or helping out in the kitchen. Danny and his autistic grandson Alex had a special bond. They went for long walks, told jokes and had a lot of laughs. Danny was able to break through and form a strong bond with Alex that lasted until his passing. Danny’s other passion was his family. He married the love of his life, Rosemary DeRosa, in 1958. They had a rock solid marriage for over 62 years and Rosemary was his strength, heart and soul through the good times and the challenges. Family was everything to Danny. If he wasn’t working a case on a Sunday, he was with his parents Pete and Mae and his brothers Joe and Peter having dinner with the entire extended family. Sauce on Sunday brought everyone together and it was the highlight of every week. The story goes that when Danny was in the service he hitchhiked and traveled hundreds of miles to get home for his Mother Mae’s gnocchi! The only thing that topped Sundays was Christmas Eve with the Arcuri's. Seafood, presents and Mae's famous pizza fritta will be forever cherished. Danny’s other love and comfort were his dogs, Max and Louie. It wasn’t unusual to see Danny and Louie going for a walk at the New Hartford Town Park. They were inseparable and the love of this devoted animal was a healing force for a police officer who saw some of the darkest sides of humanity. Danny leaves his loving wife Rosemary, Daughter Tracey Richardson (Skip), Son Daniel Arcuri (April), Grandson Alex, Granddaughter to be Arianna, who will arrive in February, Brothers and Sister-in-law Joe, and Peter (Carol) Arcuri, Sister-in-law Donna DeRosa (Karen), many nieces and nephews, great-nieces, great-nephews, cousins, and devoted friends. Danny also leaves his devoted brotherhood of NY State Police officers who always had his back and held each other up during some of the toughest times in law enforcement. A heartfelt goodbye to Frank Peo, Larry Moylan, Doug Smith and of course Nick Cerro who already made it up to heaven to prepare a place for Danny. Even at the end of his life he was a lawman. He continued to protect his family. Many times he would be seen checking out the neighborhood and locking all the doors so he and Rosemary would stay safe! Special thanks to the amazing neighbors of Hillside Ave. There are no words to thank John Bertrand and Bugzy Martin for their compassion, strength and kindness that will never be forgotten. Danny was blessed to live in one of the most phenomenal neighborhoods in the Mohawk Valley. Due to the abatement of Covid-19 restrictions, family and friends are respectfully invited to attend a Memorial Mass on Thursday morning July 15, 2021 at 11:00 at St. Mary of Mt. Carmel/Blessed Sacrament Parish to celebrate Danny’s life. Military Honors will be conferred by the United States Army. Donations may be sent to the Ronald McDonald House CNY Chapter online at https://rmhcny.org/donate or to Lifetime Assistance, Inc. online at https://www.lifetimeassistance.org/donate. Entombment took place in the Arcuri family Mausoleum in Calvary Cemetery.

NEW HARTFORD &#8211; Mr. Daniel J. Arcuri passed away peacefully on December 12, 2020 at age 84. &#8220;Danny&#8221; was a lifelong resident of the Utica area where he spent the majority of his life protecting the community as a law enforcement... View Obituary & Service Information

The family of Mr. Daniel J. Arcuri created this Life Tributes page to make it easy to share your memories.

Send flowers to the Arcuri family.