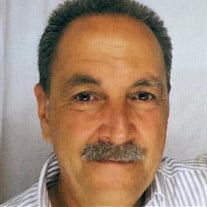 NY MILLS – Mr. Christopher P. “Chris” Taraska, age 65, passed away Tuesday morning, November 23, 2021, in the comfort and dignity of his home after a valiant effort battling cancer. Born in Utica on January 27, 1956 to the late Martin S. and Victoria (Kalen) Taraska, Chris attended John F. Kennedy High School. As a young man, he married the former Debbie L. Bonanza; the two were wed on October 31, 1980 and remained together for 41 years. Theirs was a blessed union filled with love and commitment. Chris was Debbie’s best friend, and was graced with a tremendous loving heart. Chris owned and operated his own Detailing Company in Utica. In fact, Chris’s enjoyment of cars extended into his hobbies, and he was a NASCAR fan. When he was not working, Chris loved fishing and relished the chances he got to jet ski at camp. Always a devoted family member, Chris is remembered for his unwavering commitment to being available for his family. Not only did he prioritize his best friend and his love, Debbie, but Chris also extended his loving heart towards his son, and then his grandchildren, who were the “apple of his eye.” Chris was a spiritual man who practiced his Catholic faith. He is survived by his cherished wife, Debbie; and his son and daughter-in-law, Rob and Dasha Taraska. He will be fondly remembered by his grandchildren, Jaxon Taraska and Mila Taraska; as well as his daughter, Maxine. Chris also leaves behind his brother and sister-in-law, John and Lisa Taraska; nieces, nephews, great-nieces, great-nephews, cousins; and his in-laws, Lori and David Grimaldi, and Cindy Gottuso. He will forever remain in the hearts of his longtime friends, Craig George and Dave Doolen. Chris was predeceased by his father-in-law and mother-in-law, James R. and Dolores L. (Roberts) Bonanza. The family wishes to express their gratitude to Danielle Swiderski with the Mohawk Valley Health System for her exceptional care. In keeping with Christopher’s wishes, there will be no visitation. Relatives and friends are respectfully invited to attend Christopher’s Memorial Service and Celebration of Life, which will commence on Saturday, December 4, 2021 at 3:00 PM at the Eannace Funeral Home, Inc., 932 South St., corner of Hammond Ave. Face masks are suggested.

The family of Christopher P. "Chris" Taraska created this Life Tributes page to make it easy to share your memories.

Send flowers to the Taraska family.