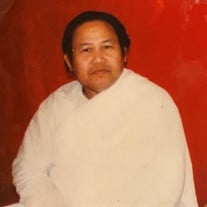 UTICA/RATANAKIRI, LAOS - Mr. Cheng Chou, age 83, passed away on December 12, 2020. Born in Ratanakiri, Laos Borderline on February 1, 1937, Cheng Chou was the son of Paut and Cheng, the youngest and last child of the family. He leaves behind his older brother, Cheng Cao; and his oldest sister, Cheng Pui. Rather than receiving his education at a regular, traditional school, Cheng Chou attended the Monastery School for Monks, and he was trained and ordained as a Monk from the age of 8 years old until 25 years old. At the age of 25 years old, he joined the military in Cambodia and served from 1962 to1967 in combat against the Vietnamese rivalry. After the war, he left the military and began working as a jeweler until the Khmer Rouge hit. In 1962, he wed his first wife Sema and they had 5 children together during their marriage prior to his wife’s death in 1976, during the Khmer Rouge time. His kids during his first marriage are as follows: Boon Chou, eldest daughter, since deceased; Lean Chou, daughter, survived and living; Say Chou, son, since deceased; Bour Chou, son, survived and living; and Pow Chou, youngest daughter, since deceased. In 1979, he met and married his second wife, Sarng Uon in Khao-I-Dang near the Thailand border which is the refuge camp in Thailand. He took in Yann Chou, a son from his wife’s previous marriage, and loved him unconditionally like his own son. During the second marriage, they also had two sons, Samnang Chou born in 1982 in Khao-I-Dang, and Neang Chou born in 1985 in the Phillipines. Cheng Chou lived a wonderful life and during his lifetime had 14 grandchildren as follows: Christina Thong Thip, Sandy Thong Thip, Janny Thong Thip, Phaorrahanh Thong Thip, Landa Thong Thip, Anonthrathanamony Sao, Keomonyrath Sao, Sainarimani Sao, Ethan Yann, Audrey Yann, Jacob Chou, Kayson Chou, Kaylie Chou, and Calvin Chou. He also had many, many great-grandchildren, a total of 16. Funeral arrangements have been entrusted to the Eannace Funeral Home, Inc., 932 South St., corner of Hammond Ave. During this time of social distancing that we are all experiencing, please take a moment to connect with Cheng Chou’s family through the “Memories” section of his obituary. Our prayers go out to all as a sign of our continued support.

UTICA/RATANAKIRI, LAOS - Mr. Cheng Chou, age 83, passed away on December 12, 2020. Born in Ratanakiri, Laos Borderline on February 1, 1937, Cheng Chou was the son of Paut and Cheng, the youngest and last child of the family. He leaves behind... View Obituary & Service Information

The family of Cheng Chou created this Life Tributes page to make it easy to share your memories.

Send flowers to the Chou family.