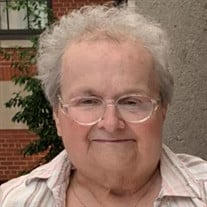 UTICA - Mrs. Carolyn L. (Whipple) Santoro, age 79, went home to the Lord on Friday, August 27, 2021 with her loving family by her side. Born in Utica on July 8, 1942, Carolyn was the daughter of the late Ralph and Harriet (Munson) Whipple. Raised and educated in Whitesboro, she was a graduate of Whitesboro High School/Class of 1960. On May 13, 1961 she married Vincent “Jim” Santoro, and from that day forward, they stood by each other and honored their commitment to one another and to their children. They shared 55 years prior to Jim’s passing on July 1, 2016. Carolyn’s first priority was raising her children as a stay-at-home-mom and tending to her house. She held a position as a Ward Clerk at the Masonic Home where she enjoyed her responsibilities and the many lasting friendships she made during those years. An optimist, Carolyn had a positive attitude and outlook on life. She saw the best in everything and everyone, and had a humble way of giving her opinion and guidance, when asked, in a gentle way with an open heart. She was blessed with the admiration of her children, grandchildren, and great-grandchildren for her unconditional love, strength, and family values. She found a unique and interactive joy when her grandchildren were born. She was not just a grandma in name only; she was involved in each of their lives and spent time caring for them. They honored traditions with her in a mutually gratifying relationship. Carolyn took her health issues in stride, never complained, and strived to do the best she could. As a long term resident of the Masonic Care Community, it was important to Carolyn to embrace the activities that lifted her soul. She was the president of the Resident Counsel, always looking for new and improved ways to benefit the community she called home. She was also a member of the Writers’ Club and was an avid reader with a preference for suspense novels by author Mary Higgins Clark. Music soothed her soul, especially her favorite genres, 1950’s, 1960’s, and old country songs that she often listened to in her room as she gazed upon family photos and reminisced about the stories behind them. Her fellow residents and staff became friends who were close to her heart. Carolyn was graced as a creative cook, one of the things she most missed, and because family gatherings were paramount, the holidays and special occasions were continued at the Masonic Home each year, and that pleased her immensely. Carolyn quietly held the Lord in her heart and she prayed with faith and fortitude during difficult and challenging times. Carolyn is survived by her children and their loves, Teresa Santoro, Christine and Thomas Bolanowski, Vincent Santoro Jr., Richard Santoro, Gina and Chris Simpson, Paula Santoro, Carrie Santoro, and the memory of her baby daughter Angela who passed in 1976; her grandchildren, Anthony Jimerson, Corey Jimerson, and Carley Ramsey; Michael Santoro and fiancée Lori Beaton, Daniel and Kathryn Santoro, Andrew Santoro and Tiffany Borruso, and Chase Santoro; Nicholas Santoro; Danielle Simpson, Christopher Simpson and Brittany, Andria Simpson and Elvir Kadic; Brittany Gonzalez; and Addie Zysk; and great-grandchildren, Martin Skermont, Benjamin Kadic, Chenzo Simpson and Bryan; Brayden Jimerson; Jazariaha Harris, and Daquam Harris. She also leaves her sister, Jean Volpe; and sister-in-law, Frances Whipple; the memory of her eldest brother and sister-in-law, James F. and Bell Whipple; sister and brother-in-law, Shirley and William Cappola; brother, Charles Whipple; brother-in-law, Phil Volpe; and brother-in-law, Michael Parrella and his late wife Catherine. She was predeceased by her brother-in-law and sister-in-law, Thomas A. and Jeanette Santoro. She also leaves many nieces, nephews, great-nieces, great-nephews, cousins; and longtime family friend, Jim Hibbard; and a host of special friends from the Masonic Care Community who enriched her life. The family is grateful to the Masonic Care Community staff of the Manhattan Household and the Activities staff who were outstanding and personable in tending to Carolyn. The family will honor and commemorate her life privately. Relatives and friends are respectfully invited to attend Carolyn’s funeral service and Celebration of Life which will commence on Wednesday, September 1, 2021 at 12:00 at the Eannace Funeral Home, Inc., 932 South St., corner of Hammond Ave. Interment will follow in St. Agnes Cemetery.

UTICA - Mrs. Carolyn L. (Whipple) Santoro, age 79, went home to the Lord on Friday, August 27, 2021 with her loving family by her side. Born in Utica on July 8, 1942, Carolyn was the daughter of the late Ralph and Harriet (Munson) Whipple.... View Obituary & Service Information

The family of Mrs. Carolyn L. (Whipple) Santoro created this Life Tributes page to make it easy to share your memories.

Send flowers to the Santoro family.