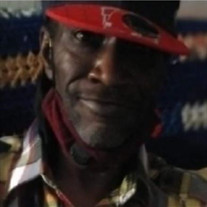 UTICA - Mr. Carl “CJ” Lester, Jr., age 57, went home to the Lord on Sunday, September 26, 2021 and was reunited with his mom Willie Mae and father Carl whom he dearly missed. Born in Macon, Georgia on August 21, 1964, Carl was the son of the late Willie “Carl” Sr. and Willie Mae (Hicks) Lester. As a young man, along with his family, he first moved to Boston, Massachusetts and then to Utica to be closer to family. Carl attended Potter Street School, Kemble Elementary School, and Utica Free Academy High School. CJ was in a relationship with Cristina Lindsey, the mother of his first 2 children. He later spent many years together with Barbara Walters and they were blessed with 2 children. Christina Williams gave him his last child, and they shared a respectful relationship when it came to parenting. Carl worked on bean farms with his mom, and later he was employed by the Utica Veal Company, Empire Recycling Corporation, and McDonald’s on the Parkway and Genesee Street as a cook. CJ was a “Momma’s boy” at heart, and he loved her very much. He was devoted to her, and she and Carl were so close and comfortable in companionship with one another. Carl had his flaws, but he made up for them and came back stronger and better than ever. He loved fishing from the bank side, and being around family, especially his brother Freddy who was also a light hearted, funny guy like Carl. Whenever he wants to joke on you, he did it no matter where he was. He had the greatest smile that would light up your world! He called every day just to check up on those he loved, and they knew him to be a very special man. He had a generous heart, but he also had the trait of being “Broke” and always working on getting it back to you… He was a bit of loner in this life but he had a rich relationship with his parents. He loved his children, but through the years they may not have shared the closest of times, but during more recent times he became appreciative and closer with them and worked to have a better relationship with them. He raised his nieces and nephews as if they were his own, and took great care of them. When the grandchildren came along he was a great Papa, attentive, loving, and compassionate. Back in the day, he loved being with his family and he stayed to the end, to tell the real story, only for the ones who wanted to hear it! When illness was more apparent, he lived with his brother Philip. They were both in wheelchairs, and both used walkers, taking up all the space! CJ’s true legacy was being a loving a caring man who truly put the needs of others before his own. Carl is survived by his children and their loves, Princess Lindsey and fiancé James Freeman (and his granddaughters, Jy’miaha and Jah’Zionna), Cincier Lester, Timarius Lester, Angelina Lester, and Shantelle Lindsey and her 2 children; and his siblings and their loved ones, Anthony “Tony” Ponders, Charles Lester, Philip Lester, James Lester and Sue, Jerome Lester and fiancée CoCo, Adrian Lester, and Carlene Lester. He was preceded by a sister, Carlene Lester-Jones; and a brother, Freddy Lester. He also leaves a host of nieces, nephews, great-nieces, and great-nephews, especially Christina Ware and Markel Ware; and cousins. Carl’s mother and father were his best friends, and he will be laid to rest with them, sharing the closeness they had in life. He was predeceased by his maternal grandparents, Jimmy and Elma Hicks; paternal grandparents, Gussie and Rosa Lester; great-niece, Zikeya Lester; great-nephew, Jahzier Johnson; aunts, RosaMae Lester Dawson, and Katie Hicks; uncle, Leon Hicks; and other beloved family members. A special thank you is extended to Carl’s brothers, Phil, James, and Charles, as well as his son-in-law, James Freeman, niece, Christina, and great-nephew, Markel, who were by his side when he needed them most. Visitation will be held Tuesday, October 5, 2021 from 4:00 -5:00 at the Eannace Funeral Home, Inc., 932 South St., corner of Hammond Ave. Carl’s Home Going Service and Celebration of Life will commence on Tuesday at the funeral home immediately upon the conclusion of visitation.

The family of Carl "CJ" Lester, Jr. created this Life Tributes page to make it easy to share your memories.